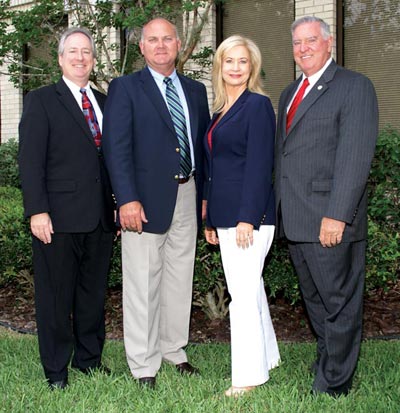 Three Governing Board members are moving into new leadership roles this year, while a fourth has been given his first opportunity to serve as an officer.

C. A. “Neil” Combee was unanimously elected by his peers in May to serve as the District’s Governing Board chair.

“It’s an absolute honor and privilege to serve as chair,” said Combee during the May Governing Board meeting. “It is something I’ve looked forward to for quite some time.”

Combee served as the Board secretary and vice chair before being elected chair.

According to outgoing Chair Judy Whitehead, the position takes on a life of its own.

“I’ll never forget Tom (Dabney) asking me if I was ready to get that call at 11 p.m. from the Governor’s office about some issue,” said Whitehead. “I’m sure you are up to the challenge.”

Combee of Lakeland was appointed to the Governing Board in April 2005. He is also co-chair ex officio of the District’s Peace River Basin Board. His term expires March 1, 2009.

A Polk County native, he graduated from Lakeland High School and attended Polk Community College and Florida State University. He has a Florida real estate license.

Combee also served on the Polk County Board of County Commissioners from November 1988 to November 2004, during which he was the commission’s liaison with the District. He continues to work on his family’s farm and ranch and is a realtor for Century Companies of Lakeland.

Todd Pressman
Pressman of Oldsmar was first appointed to the Governing Board in April 2005 and is also co-chair ex officio of the District’s Pinellas-Anclote River Basin Board. His term expires March 1, 2010.

Pressman served as the Governing Board secretary before being elected vice chair.

He has spent the last 17 years in the professional pursuit of land use issues, political campaigns and lobbying.

Closshey of Plant City was appointed to the Governing Board in April 2005. She is also chair ex officio of the District’s Alafia River Basin Board. Her term expires March 1, 2009.

Closshey served as the Governing Board treasurer before being elected secretary.

She has been a Florida resident since 1956. Closshey received bachelor of arts degrees in both marketing and business administration from the University of South Florida. She is a licensed Florida real estate broker.

Oakley of Zephyrhills was appointed to the Governing Board in June 2007. He is also chair ex officio of the Withlacoochee River Basin Board. His term expires March 1, 2011.

Oakley graduated from Pasco High School in Dade City. He earned a bachelor’s degree in accounting from Carson-Newman College in Jefferson City, TN.

Oakley is executive vice president of Oakley Groves, Inc., in Lake Wales. He has spent the majority of his career in the citrus industry and has experience in the caretaking, marketing, processing and transportation of citrus.

In addition to his citrus industry experience, Oakley serves as director of Florida Traditions Bank in Dade City, and he is also a licensed real estate broker with experience in both real estate and land development.