The new Governing Board chair’s handshake is firm and dry, his gaze direct and steady.

It’s easy to picture him as a linebacker at Lakeland High School, zeroing in on the opposing team’s running back. The shortest distance between two points is a straight line. It’s also easy to imagine him, after a crushing tackle, helping the guy up and then telling him a funny story after the game.

If a person can be defined by place, then Neil Combee’s definition is rooted five generations deep in the soils of Polk County. Silas McClellan, “on my grandfather’s side,” was the third registered settler in Polk County. For the 49-year-old Neil, Lakeland has always been home.

“She’s an unbelievably kind, loving mother. Always put her kids first. Looking back, she made an awful lot of sacrifices for the kids so we could do what we wanted to do,” Neil said.

He was the second of four children, the only boy surrounded by girls, but he admits to no major gripes. “My sisters were always pretty good to me, taking care of me. It’s the way we grew up.”

The chores were split. He had the outside duties and his sisters the inside duties. “Of course, there were three of them and only one of me.”

In those days, before mechanical harvesting, all of the children did their share of stacking sod, with one sibling cutting and the others stacking. Neil nodded, remembering. “We stacked our share of sod.” The sod operation was year- round, and if it wasn’t football season, Neil was laying sod all over the greater Lakeland area.

The Lakeland of Neil’s youth was a much smaller place, close-knit, with two public high schools. “Everybody seemed to know everybody else. It was a great place to live.”

Neil also participated in student government through his civics class. Students spent a week at city hall, had their own board meetings and elected their own mayor . . . Neil Combee.

His early political success would be a sign of things to come, but first there was football and education. His athletic achievements earned him a chance at a small university in West Virginia now known as Salem University. But West Virginia was a long way from home for the Polk County youth. After three weeks, homesick, Neil figured it was time to leave.

“It was right before school started. Two of us left. Terry Denson . . . a really fast running back. He’d never been away from home either. He wouldn’t let me leave without him.”

Returning home, Neil attended Polk Community College for a year before letting a friend talk him into going to Florida State University and trying to be a walk-on for the football team. “It wasn’t nearly as far off as West Virginia.”

He made it onto the junior varsity team and experienced the thrill of playing in the big stadiums, but soon after that the university did away with its junior varsity program. Neil’s pretty sure it had nothing to do with his tenure. The university gave him meals and books, and he appreciated his time there. But with a typically candid self-assessment, he recognized he didn’t have the talent for varsity ball. It was time to return home, go to community college and work on that agribusiness degree.

“I figured my claim to fame would be playing JV football at FSU.”

Neil’s decision to return home had one life-changing effect. Had he stayed at FSU, he never would have been standing in line with friends to register for classes at Polk Community College. And he wouldn’t have seen the pretty, petite brunette with the beautiful smile. A friend knew her and waved. Neil asked his friend who she was. His friend said, “Linda Weatherford.” Neil replied, “OK, I’m going to marry that girl.”

The shortest distance between two points is a straight line. The couple dated for a year and a half before marrying.

Neil went to work with a neighbor in a sod business before moving on to the Fox Branch Cattle Company, a 15,000-acre cattle ranch with a “couple thousand brood cows. I wanted to rope and ride. Got to be a cowboy, always a cowboy.”

As a young boy, before he started school, Neil had watched “Stoney Burke,” a television series about a tough bronc rider in pursuit of a championship. The series only lasted one year, but it made a strong impression on the youngster.

“In each episode he would always get into difficult spots but, in the end, he would come out on top, helping others along the way. He was a real hero and a great influence on me. Even bigger than Andy Griffith.”

After four years of cowboying, Neil obtained his real estate license and went to work for a local real estate development firm, Harper and Ellsworth. Eventually, some of his friends began suggesting he should consider running for county commissioner. Looking back, the signs were there that someday Neil would run for office.

Neil’s father enjoyed fishing, hunting and horseracing. He was a man of few words, but he had a passion for politics. He enjoyed watching the political programs on television and providing his own commentary on the issues. In fact, Neil’s mother was also interested in politics, leading to spirited discussions about the state of the world — what was working and what wasn’t working.

Another influence on Neil’s decision to run was his grandfather’s first cousin (Aldine Combee) who served four terms as county commissioner. Neil grew up going with him to church, horse shows and rodeos.

Once he decided to enter the game, Neil zeroed in on the task with the same directness previously used to bring down speedy running backs and woo a wife. Taking a hiatus from work, he spent a year attending every county commission and committee meeting to get firsthand information about the issues.

“I had to know what was going on. I didn’t want to make a fool out of myself.”

Guided by “good old-fashioned homegrown Polk County rearin’,” Neil was elected to office in 1988 and reelected in 1992, 1996 and 2000, matching the four consecutive terms held by Aldine Combee. He connected with the community because he was a part of that community and shared its roots and values.

“I knew the folks I grew up around and what they wanted to see and expected from their local government. One of my biggest issues was always affordability. How does this decision impact local folks and their personal finances and quality of life?”

After 16 years of public service, Neil reentered the private sector as a realtor for Century Companies of Lakeland while continuing to work on his family’s farm and ranch, as he has done all his life. But then the call came from county associates asking if Neil would consider applying for a position on the District Governing Board. He was appointed to the Board by Gov. Jeb Bush in April 2005.

“I’ve had an interest in water and related issues for a long time, going back to as long as I’ve been interested in county commissions. It’s an honor to serve on the Board. And it’s certainly an honor to have your peers allow you to serve as chair.”

Neil says his priority as chair will be to step up communications between the District and the local governments regarding water resources issues and to emphasize what the District is trying to accomplish. 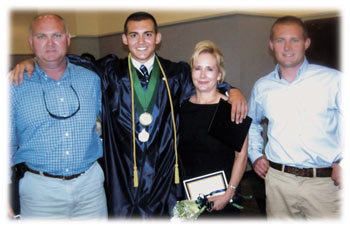 Neil and Linda Combee, with their two sons Beau and Jerad, at Beau’s high school graduation.

Amid all the work and demands on his time, Neil and Linda raised two sons. Jerad, 23, has a real estate license and insurance license, goes to school, partners on a 100-acre Bermuda hay operation and takes care of the ranch. Their younger son, Beau, 18, recently graduated from McKeel Academy, a charter school in Lakeland. He’s an aspiring left-handed pitcher. For the last three years Neil has traveled on the weekends to baseball games and tournaments throughout the state and Southeast.

With such a hectic schedule, being chair of the Governing Board will require Neil to devote even more time to the unpaid position. But he says that’s all right, admitting that “I’d much rather be a driver than a passenger.”