Section 373.036, F.S. requires the water management districts to prepare a "Consolidated Water Management District Annual Report” consisting of several reporting documents that had historically been submitted separately. The legislation requires the consolidated report to be submitted by March 1 of each year to the Governor, DEP, the President of the Senate and the Speaker of the House of Representatives. In addition, copies must be provided, “… to the chairs of all legislative committees having substantive or fiscal jurisdiction over the districts and the governing body of each county in the district having jurisdiction or deriving any funds for operations of the district. Copies of the consolidated report must be made available to the public, either in printed or electronic format.”

This consolidated report is a significant communication tool for the District. The report’s components were formerly individually distributed at various times of the year. The consolidation results in streamlining the reporting documents in one package. It also allows greater efficiency in comparing different reporting mechanisms. 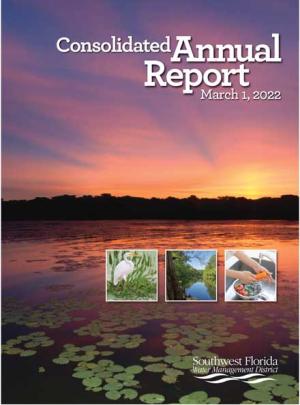