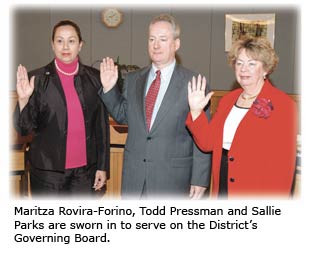 The newly appointed members are Sallie Parks and Maritza Rovira-Forino. Todd Pressman was reappointed. Pressman, of Palm Harbor, has served on the Governing Board since April 2005.

Pressman says he is looking forward to serving a full term on the Board after getting his “feet wet” completing Ronnie Duncan’s term when Duncan was elected a Pinellas County commissioner.

Sallie Parks of Palm Harbor was appointed to succeed Watson L. Haynes II, whose term expired March 1, 2006. Parks is retired and a former Pinellas County commissioner. She was appointed for a term beginning March 3, 2006, and ending March 1, 2010.

“Having a long history in working with environmental protection and preservation, I understand the balance of meeting the needs of the public, the business community and the agricultural industry, along with protecting the environment,” said Parks. “As an elected official, I had to be sure the public water supply needs were met.”

Rovira-Forino says she applied to become a Board member after gaining a fuller knowledge of water resources issues by serving on the Northwest Hillsborough Basin Board.

With the addition of Parks and Rovira-Forino, the Governing Board has a female majority for the first time.