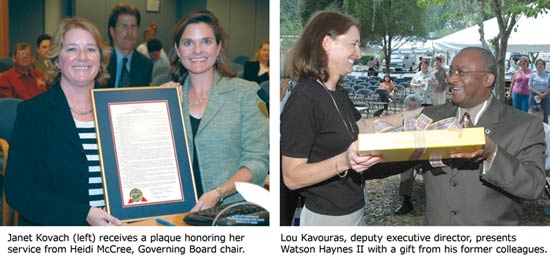 “Watson is a dedicated worker for the region and the state,” said David Moore, District executive director.” His input on the District’s finance committee and diversity efforts are some of the highlights.”

“When I see a District public service announcement or a billboard, I smile; and when I wear my District shirt or hat, I am proud of what it stands for,” said Haynes, who also expressed his gratitude to the District’s employees for the work they do.

Moore says he will always remember Kovach’s volunteer spirit and the support she gave to the staff. She served on the Board from September 2000 to March 2006. During that time, she served two, one-year terms as the Board’s secretary.

“Janet has been involved in volunteerism for a long time,” said Moore. “We want to thank her for being a tireless volunteer who puts a lot of passion in her work and who has always been supportive of the staff.”

Ed Chance, Governing Board member, remembers Kovach as a colleague and friend who was always there for him and the District when he was having health issues. “There were times when I was unable to attend meetings, but Janet was there, representing the District, and I thank her for that.”

Governing Board members are appointed by the Governor and serve on a volunteer basis.