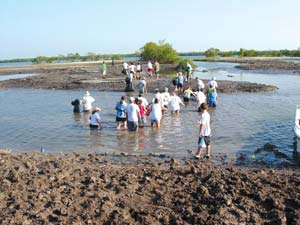 Hundreds of volunteers trudged through the mud to get to hard-to-reach places that needed planting.

This September approximately 400 volunteers set out across 32 acres of muddy ground at the Terra Ceia Aquatic and State Park preserves restoration project in Manatee County with one goal in mind: The volunteers were determined to set a new record for the most plants installed during a single-day Tampa Bay volunteer planting.

As the group split up into teams and spread out across the mucky landscape, Tampa Bay Watch Executive Director Peter Clark thanked the crowd for dedicating their Saturday to volunteer.

The volunteers and staff from the District’s Surface Water Improvement and Management (SWIM) Program, Tampa Bay Watch, the Florida Department of Environmental Protection (FDEP) and the Florida Fish and Wildlife Conservation Commission (FWC) planted approximately 34,000 marsh grass plants along the restoration sites, which consist of restored and created intertidal and open-water habitats.

Volunteer Savannah Harte had the opportunity to see the area with her dad, contractor Dan Harte, before he and his employees reconfigured the area, which had been dredged and filled for a subdivision. “When I first came out with him, the land was covered with Brazilian peppers,” said Harte.

Despite getting dirtier than usual, the volunteers seemed to enjoy themselves.

Near the end of the day, one group of volunteers emerged from the section they were assigned to plant, covered in mud up to their chests.

“We called it ‘Hamburger Hill,’ ” laughed Gail Young. “One of our friends was so stuck he needed my husband and me to pull him out.”

Gail, her husband Ron and about a dozen other members of the area’s paddle fishing community volunteered their time because they fish the area and believe it is important to give back.

The Youngs have participated in other volunteer plantings and say none were as muddy as this one.

“You have something to be proud of,” Brandt Henningsen, District chief environmental scientist, told the volunteers. “I encourage you to come back over the next two years to watch the marsh mature.”

The volunteer planting completes two phases of a large-scale ecosystem restoration project within the preserves. The Terra Ceia Ecosystem Restoration Project, which encompasses 1,900 acres of estuarine and freshwater wetlands and coastal uplands, is being spearheaded by the District’s SWIM Program in cooperation with the FDEP. When complete, the restoration project will be the largest within the Tampa Bay area.

The Terra Ceia Aquatic and State Park preserves are the result of a joint acquisition between the District and the state to protect the natural and coastal resources of Tampa Bay.

In addition to the volunteers and the agencies listed above, several other cooperators helped make the event a success, including the Manatee County Transportation Department, Tampa Contracting Services, King Engineering and the inmates from the Manatee County Correctional Facility. The inmates harvest marsh plants at the FWC nursery.

In addition to the plants harvested by the inmates, students from East Bay High School, who participate in Tampa Bay Watch’s “Grasses in Classes” program, arrived to volunteer that morning, bringing with them 4,000 additional plants. Students involved with the program maintain and harvest marsh grass from nurseries at their school to use in habitat restoration projects. 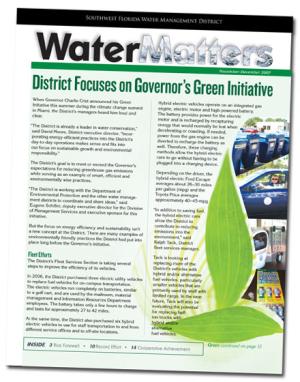