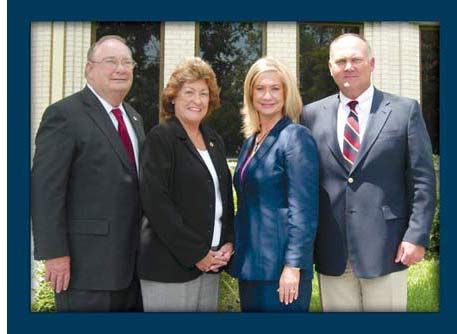 Jerry Rice, chair; Judy Whitehead, vice chair; Jennifer Closshey, treasurer; and Neil Combee, secretary, were all elected to their positions in May.

“I have had the privilege to serve under four very dynamic and effective chairs, Ronnie Duncan, Tom Dabney, Watson Haynes and Heidi McCree,” said Rice. “I hope to build on the legacy they established at the District.”

CHAIR Jerry Rice
Rice of Dade City was appointed to the Governing Board in March 2003. He was elected the Board’s treasurer in May 2004. He is also chair ex officio of the District’s Withlacoochee River Basin Board. His term expires March 1, 2007.

Before beginning his real estate business, Rice was president and chief operating officer of Lykes Pasco, Inc., and subsequently vice president of government and industry relations for Lykes Bros., Inc. He retired from that position in 1998.

VICE CHAIR Judy Whitehead
Whitehead of Brooksville was appointed to the Governing Board in March 2003. She was elected the Board’s secretary in May 2004. She is also chair ex officio of the District’s Coastal Rivers Basin Board. Her term expires March 1, 2007.

Whitehead is a native Floridian and has spent most of her life along the coast in west-central Florida. She attended the University of Tampa Business College from 1962 to 1963. Whitehead is a state certified real estate appraiser.

TREASURER Jennifer Closshey
Closshey of Plant City was appointed to the Governing Board in April 2005. She is also chair ex officio of the District’s Alafia River Basin Board. Her term expires March 1, 2009.

Closshey has been a Florida resident since 1956. She received bachelor of arts degrees in both marketing and business administration from the University of South Florida. Closshey is a licensed Florida real estate broker.

SECRETARY Neil Combee
Combee of Lakeland was appointed to the Governing Board in April 2005. He is also co-chair ex officio of the District’s Peace River Basin Board. His term expires March 1, 2009.

Combee is a former Polk County commissioner who continues to work on his family’s farm and ranch, and is a realtor for Century Companies of Lakeland.

“In my opinion, we have an excellent board, an effective executive staff, and knowledgeable and tremendously dedicated employees,” said Rice. “I am confident that together we can continue to move the District forward in a manner that will make the citizens that we serve and ourselves proud.”