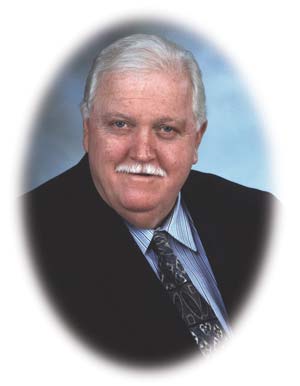 The District lost a friend and a staunch advocate for the water resources when Governing Board member Ed Chance died on June 26, the day before the June Board meeting.

Governing Board members and staff opened the meeting the next day with remembrances of Chance, a well-loved colleague with a gift for storytelling and passion for fairness.

“Ed was a special friend to all of us,” said Governing Board Chair Jerry Rice. “Our District, our state and particularly his area in Manatee County will sorely miss him.”

In honor of Chance, Vice Chair Judy Whitehead read a poem written by Mary E. Frye in 1932. The poem reads, in part, “I am the soft stars that shine at night. Do not stand at my grave and cry, I am not there; I did not die.”

Board Secretary Neil Combee remembered “a tenderhearted southern gentleman. Florida and the world is a better place because of Ed Chance and the things he’s done for the folks in Manatee County, this District and this state.”

Board Treasurer Jennifer Closshey said the tragic loss could serve as a reminder to tell people how much we appreciate them.

“Ed Chance was such a role model for me. I never had the opportunity, the timing was just never right, to thank him while he was here. I think that’s a lesson for all of us. Sometimes we need to pass out roses when people are here.”

Board member Tom Dabney, who also served as co-chair ex officio with Chance on the Manasota Basin Board, recalled Ed’s passion and commitment to service.

“Ed was unafraid to take on difficult issues, but always treated everyone with respect. He was a staunch supporter of District staff and committed countless volunteer hours working on behalf of the water resources and the residents of west-central Florida. His leadership, guidance and friendship will be greatly missed,” Moore said.

In his opening invocation, District General Counsel Bill Bilenky noted that Chance was “driven by a love for us and the people we serve” and that he is now “free of pain and singing gospels with the angels.”

He was appointed to the Board in September 2000 and reappointed in 2001 and 2005. The Board unanimously elected him honorary chair in May 2004. He was the co-chair ex officio of the Manasota Basin Board.

Chance served in the U.S. Army and Army Reserve. He earned a diploma from the Tampa Barber College in 1963 and completed the Executive Fellows program of the University of South Florida Institute of Government. Chance was licensed by the Department of Business and Professional Regulation Florida Barber Board in 1963 and the Division of Real Estate in 1978. He served for eight years on the Florida Barber Board.

Chance served for 12 years on the Manatee County Commission and was chairman for six years. In his capacity as a county commissioner, he was a founding member of the Peace River/Manasota Regional Water Supply Authority Board. He served on the Authority’s board of directors for 10 years and was its chairman for five.

After leaving the County Commission, Chance served as the Authority’s government affairs coordinator for five years.