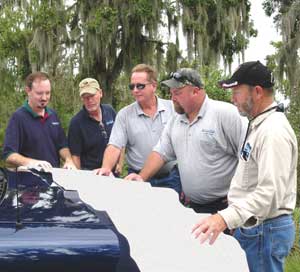 For Mark Brown, environmental science is more than just a career. It is his personal interest.

Brown spent part of his childhood growing up on a farm in Georgia. Influenced by his grandfather, who was a soil conservationist for the USDA Soil Conservation Service, Brown developed his interest in natural habitat protection and restoration early on.

When his family spent summer vacations in Florida, he became interested in the wide variety of natural ecosystems in the state.

Brown graduated from the University of Florida with a Bachelor of Science degree in soil science and a minor in environmental science. He has spent more than 20 years conducting environmental evaluations while employed with various federal, state and local agencies, as well as private consulting firms.

Currently, he is a senior environmental scientist in the District’s Technical Services Department. Since 1999, he has managed the Florida Department of Transportation (FDOT) Mitigation Program for the District. Wetland mitigation is a process that offsets the function and value of wetlands impacted by various construction-related activities.

In this position, Brown coordinates with more than 300 individuals from various agencies and consultants, including 100 District employees, to conduct designated mitigation projects for wetland impacts associated with FDOT-funded projects. He interacts with several District departments and sections including Regulation, Operations, SWIM, Land Resources, Environmental, Engineering and Finance. In addition to working on technical mitigation issues, Brown is also responsible for coordinating project and program budgets. The District initially funds the mitigation activities and is then reimbursed by FDOT for direct costs.

“Without the substantial assistance and support of these various departments and other agencies, the mitigation program could not be successful,” said Brown. “I cannot emphasize enough how much I greatly appreciate and value the knowledge and assistance provided by others.”

The District’s mitigation program began in 1996. For the first three years, the program averaged only five new roadway projects submitted annually. Since 2000, there has been an annual average of 35 new projects.

“As of 2005, the FDOT mitigation program at the District has designated 35 mitigation projects requiring $24 million to implement,” said Brown. “These projects encompass over 9,000 acres of habitat improvements to compensate for wetland impacts associated with approximately 160 FDOT projects.”

When Brown isn’t working on restoration projects and managing the mitigation program, he likes to spend his days off visiting towns and other regions around Florida. He enjoys opportunities to hike, bike and canoe through natural areas and state parks.

For many, these types of trips would be purely recreational, but he said they also provide him the opportunity to expand his knowledge and appreciation of Florida’s ecosystems, that in turn benefits his efforts to continually improve the mitigation program.

Whether it’s on or off the clock, he is always learning about the environment.

“For me personally, I couldn’t imagine having a career in anything other than environmental science,” Brown said. “Florida is rapidly being developed so I offer whatever assistance I can to preserve and restore native habitats that will hopefully provide a variety of benefits to future generations of people and wildlife alike.”