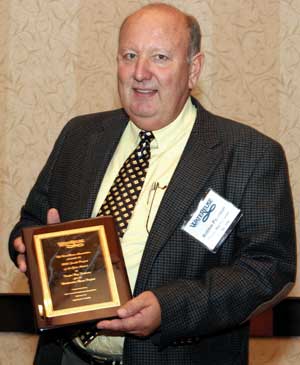 An innovative project in Hillsborough County could lead to a water reuse revolution!

The cooperatively funded effort between the District’s Hillsborough River Basin Board and Tampa Bay Fisheries won the 2005 WateReuse Award for facilities generating less than 1 million gallons of reuse water per day. Robert Paterson, president and CEO of Tampa Bay Fisheries (Fisheries), accepted the award during the annual WateReuse Symposium in September.

The project is providing an alternative water supply to the Tampa Wholesale Nursery by reusing the Fisheries’ treated wastewater.

Castor and Dennis Stone, P.E., the Fisheries’ engineer and project manager, co-authored the paper “From Seafood to Shrubbery,” which described the project. They presented the paper during the symposium’s technical program.

“National recognition of this project by the WateReuse Association helps establish this type of project as a best management practice in the food packaging industry,” said Castor.

Tampa Bay Fisheries is part of the largest privately owned shrimp importing and packing group in the United States. The company processes more than one million pounds of seafood a week. The freezer in the company’s Tampa plant, which is its primary plant, can hold 10 million pounds of frozen seafood. Tampa Bay Fisheries specializes in frozen shrimp, which it sells wholesale to restaurant suppliers.

Before this project was complete, approximately 175,000 gallons of treated wastewater per day (gpd) was being sprayed on nearby hayfields and pasture. Now 90,000 gpd of that water is being used to offset ground water that was being withdrawn for irrigation at the nursery. That accounts for 32 percent of the water currently used each day at the nursery. The company has plans to take the remaining 85,000 gpd within the next 12 to 18 months, representing a total of 78 percent of the business’s current needs, assuming this phase meets all expectations.

Contractors built a lined 3-acre, 5-million-gallon storage pond on fishery property. Two 60-horsepower pumps are used to move the water from the pond, through a 3,250-foot, 8-inch pipeline under McIntosh Road to the nursery’s irrigation system. The water is used to irrigate woody ornamental landscape plants.

The project can serve as a demonstration to similar facilities within the District.