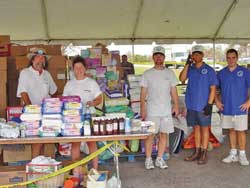 “For me, spending a week away from my wife and 2-year old son was not very encouraging. My son did not understand why I needed to be away from him. He doesn’t understand hardship, homelessness, or hunger — he just missed his daddy. My hope is that when he is older, he can look back at my tiny sacrifice and become inspired to do the same.”
Jason Mickel, Planning Department
Route 761 Distribution Center Volunteer

“It’s hard to comprehend how some people are taking advantage of the difficult situation by looting, greediness, and tricking the elderly. Seeing how affected and how helpless our elderly are was gut wrenching.”
Kris Kaufman, SWIM Program
Distribution Center Volunteer 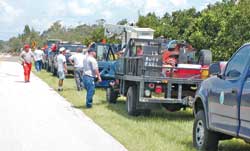 “What struck me was just how kind the people were, a lot of people were real kind of us, offering us food or their help for us helping them.”
Alan Saxton, Operations
Chainsaw/debris clearing crew

“I was very impressed at the level of professionalism that everyone displayed and how the many government agencies worked so seamlessly.”
Chris J. Anastasiou, SWIM Program
Distribution Center Volunteer

“Brownville Rocks!”
“I have a whole new respect for the National Guard. Those young guys, most were 18 to 23 years old, were just incredible. We couldn’t have done it without them. They were changing people’s tires, pulling cars out of ditches, unloading trucks, everything.”
Rand Baldwin, Community and Legislative Affairs
Brownville Distribution Center Volunteer 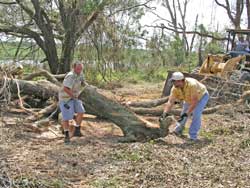 “There was a family with five kids that came to get supplies. They told us the only thing left of their home was an addition, which was what they were living in. The inspectors had just red-tagged it, and they asked us what that meant. We told them it means it is unsafe to live there and gave them a tent and a FEMA contact card.”
Joe Quinn, Planning Department
Route 761 Distribution Center Volunteer

“A couple of local teenagers volunteered with us. Most people tend to think that teenagers don’t care about anything. Their actions proved that they care about their community and I became close to people that I would not normally have tried to get to know any better. It was a bonding experience for everybody involved.”
Yassert Gonzalez, Planning Department.
Route 761 Distribution Center Volunteer

“A lot of people respected that you were there and appreciated it. For instance, we would be holding up a road to get a truck loaded up and people would sit there patiently. I didn’t hear one horn blow when we were down there. Never.”
Nelson Brass, Operations
Chainsaw/debris clearing crew

“It amazed me what the storm did down there like breaking concrete phone poles. It gave me a whole new respect for hurricanes.”
Alex Auton, Operations
Chainsaw/debris clearing crew

“One of the people we were helping out saw the roof start lifting off his house and he told his kids to get in the closet. He said that was one of the scariest things he’s ever been through.”
Marcy Sikes, Operations
Chainsaw/debris clearing crew