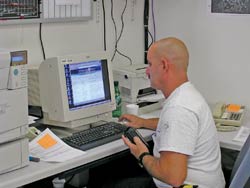 “I had to leave my wife and two teenage kids here in order to help out,” said Flood. “It was a hard situation, but I just had to pray that they would be safe while I went to help other people.”

Flood is a tradesworker for Structural Operations at the District’s Brooksville office. According to Ravencraft, Flood’s outstanding performance and high interest during this year’s training with the SEOC for hurricane preparedness made Flood the perfect candidate to represent the District in the SEOC.

“The District always tries to encourage employees who show an interest in something,” said Ravencraft. “Because Garry was so enthused about emergency response, I knew he would do a great job up at the SEOC.”

Flood arrived in Tallahassee and was immediately put to work. He was asked to serve as a liaison between the District and Emergency Support Functions (ESF) 1 and 3. There are 17 ESF groups that manage and coordinate specific categories of assistance common to all disasters. ESF 1 assists in transportation issues and ESF 3 assists with public works and engineering.

“The ESF groups were arranged in rooms around the main command center, which was filled with computers and other equipment,” said Flood. “It was a hectic, fast-paced environment, especially as the storm came in and immediately after it passed.”

As Hurricane Charley made landfall, Flood worked with the Florida Tracker database system in the SEOC to provide help to affected areas.

Flood’s main responsibility was to monitor the Tracker database system and manage the fulfillment of transportation/public works requests that the District EOC and the EOCs of other agencies could provide.

“I had to follow the requests and make sure that the need was adequately fulfilled,” said Flood. “And if I knew of a request that we couldn’t fulfill, it was my responsibility to get the response in the Tracker system.”

In one instance, Flood received a request for a tanker truck to deliver 20,000 gallons of much-needed water to Fawcett Memorial Hospital in storm-ravaged Port Charlotte. The hospital required non-potable water for their booster pumps, sterilizers and chillers. He knew that the District and Tampa Bay Water had tankers available, so he called Danny Brooks at the District EOC and arranged to use the trucks to provide the assistance until the hospital’s water supply was reestablished.

Flood remained in Tallahassee until Monday afternoon, August 16, and then returned to helping in the District’s EOC. From the Brooksville office, he has continued monitoring the Tracker database and helping the District meet the needs of Hurricane Charley’s victims.

“We’ve helped with all sorts of things,” said Flood. “From shipping out cases of bug spray for combating mosquitoes, to sending out crews to remove debris from drainage areas, we’re doing all we can to help out.”

And if asked to go to Tallahassee to help in the SEOC again, would Flood make the trip?

“Absolutely, in a heartbeat,” he said. “It was a tremendous learning experience and I really enjoy helping people in need.”

Back at home in Brooksville, Flood’s wife and children remained safe from Hurricane Charley as the storm made landfall south of the area. Plus, his wife works at Moton Elementary School, which serves as a shelter during disaster situations. So he knew they would be relatively safe and surrounded by friends if the storm hit.