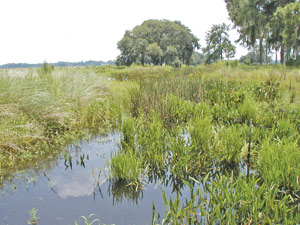 A multimillion-dollar cooperative project among three government entities is cleaning up a watershed that eventually empties into Tampa Bay.

The creation of McIntosh Park began when Hillsborough County purchased the 400-acre plot through its Environmental Lands Acquisition and Protection Program (ELAPP) for Plant City. The land is adjacent to the downstream segment of the Eastside Canal, which was built in the late 1930s to drain the 6,000-acre Eastside Canal Watershed. At that time, the watershed was primarily used for agriculture. Now it is used for a mixture of agricultural, medium-to low-density residential and industrial, all of which were largely developed prior to any stormwater quality regulations.

That means all the storm water and associated pollutants and debris that currently pass by the McIntosh Park property end up in the Hillsborough River, Hillsborough Bay and finally Tampa Bay. These water bodies all contain Florida Department of Environmental Protection impaired water body segments that will require some type of stormwater treatment. The requirement for stormwater treatment of the contributing watershed is further documented by a 1997 SWFWMD study.

Mike Holtkamp, the District engineer tasked with reviewing the project, saw the potential for providing significant water quality treatment for the canal. His specific recommendations to the city of Plant City became the launching point for the McIntosh Park Enhanced Stormwater Treatment Wetland (ETW) project.

Phosphorus stimulates algal growth. Therefore, limiting the amount of phosphorus entering the Hillsborough River system helps control algae, a primary water quality issue in the watershed. The project’s phosphorus reduction goal is 2.1 tons, or 6 percent of the overall phosphorus load-reduction target of 34 tons for the upper Hillsborough River watershed. This pollution reduction goal is outlined in a 1997 report prepared for the District by Limno-Tech, Inc.

The main purpose of this park is to serve as an ETW. 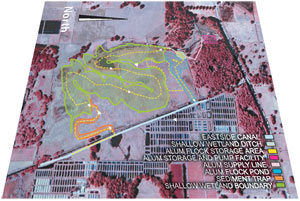 “An enhanced stormwater treatment wetland is a new type of stormwater wetland with a greater effectiveness in terms of nutrient and other pollution reduction,” said Griffin. “This is accomplished through the combination of herbaceous wetland and wetland soil processes and the use of aluminum sulfate (alum).”

Alum is a chemical agent that promotes the formation of large particle aggregates, or floc. The floc is made up of aluminum hydroxide and absorbed constituents of the stormwater. The floc precipitates out of solution, removing a variety of pollutants from the storm water.

The initial wetland construction at the McIntosh Park site provides wetland treatment to 700 contributing acres and the rehydration of historic wetlands on the site, as well as wetland habitat expansion through natural recruitment. The District, in conjunction with the U.S. Department of Agriculture’s Agricultural Research Service in Brooksville, is conducting soil and benthic sampling to determine how much pollution the base- wetland can remove.

A consultant for the planning and permitting of the second construction element has been selected and initial evaluation and planning is in progress. Construction for the second element of the ETW is planned for fiscal years 2005 and 2006.

The overall cost of this project is estimated to be $2,780,000. However, the project exceeds $4 million if you consider the value of the land and the costs incurred during the design and permitting phases and the first construction phase. Of that cost, the Hillsborough River Basin will have expended just under $800,000. The remaining funding for this project came from the state’s Surface Water Improvement and Management (SWIM) Program, Hillsborough County, Plant City and two grants from the U.S. Environmental Protection Agency (EPA).

“The project would not be possible without the cooperation of the city of Plant City and Hillsborough County,” said Griffin. “The city has supported the project from the beginning and was the lead on the construction of the base-wetland.”

The Florida Communities Trust Fund and ELAPP purchased the land for the city, and the county will join with the city for future management of the wetland.

The city, as landowner, is currently responsible for the operation and management costs, which are estimated to be less than $80,000 per year. However, a new agreement between the city and Hillsborough County will allow the two to share these costs and responsibilities.

Once the necessary permits are in place, the District’s Operations Department will construct the access road and install the necessary structures to begin the final construction. A request for proposal for the construction of the wetland and alum facility will be advertised between October and November. Construction on the ETW is planned for April 2005. The final wetland elements should be completed by August 2006. The city of Plant City and Hillsborough County will begin the management of the wetland and alum facility in October 2006.