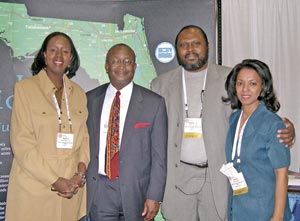 Be loyal. Be a team player. Act right.

Those are the golden rules that District Governing Board Chair Watson L. Haynes II learned early in his life from his mother, a woman with a third-grade education but a Ph.D. in character.

The late Emma Haynes raised seven children on her own. When she retired from Head Start, the organization honored her for 29 years without missing a day of work. In words and deeds, she taught her children the importance of the golden rules.

“My mother always said, ‘If you have nobody else, you have to have each other.’ We were raised to look out for each other.”

Teamwork was stressed, with each child having duties to perform as part of the family team. Even today, Haynes shares the credit for his life’s successes with those around him.

Along with loyalty and teamwork, Mrs. Haynes stressed propriety.

“Mother always made sure we looked right and acted right. In the business world, that translates into behaving as a professional.”

Watson Haynes took those lessons to heart and at an early age exhibited leadership qualities. During the early years of desegregation at the predominantly white St. Petersburg High School, Haynes was elected class president. Years later he learned he was the first African-American to achieve that distinction. Typically, he shares the credit with a teacher who encouraged him to run.

“I didn’t think it would happen. I didn’t think I had a chance. There were multiple candidates, but when the votes came in, from a class of 350, I received a majority of votes. No need for a runoff. That was one of my proudest moments.”

Haynes went on to attain an undergraduate degree in public administration and a master’s degree in management.

As a member of a large family, Haynes soon discovered a skill as a negotiator. He enjoys bringing parties together and discovering their shared interests. Haynes said he is happiest when he’s able to help others be happy and gain a sense of pride, which explains his active community involvement. He is president/CEO of the Coalition for a Safe and Drug- Free St. Petersburg, a nonprofit organization dedicated to stopping drug use through intervention and prevention programs, especially in economically depressed neighborhoods.

He currently serves as chairman of the McCabe United Methodist Church Council, and over the last 25 years, he has served on numerous governmental boards and commissions, charitable and business organizations.

Haynes is a loyal team player who stresses doing the right thing. So when Gov. Jeb Bush asked Haynes in 1999 if he would be interested in being a District Governing Board member, Haynes agreed, despite an already full workload with business, family and community responsibilities.

Governing Board members are unpaid volunteers. To prepare for monthly meetings, Board members receive volumes of information requiring many hours of review and study, including meetings with staff. Board members also represent the District at numerous meetings involving government agencies, business and community groups. Haynes admits he didn’t recognize the size of the commitment when he granted the Governor’s request.

“I didn’t know how great and vast the work of the Governing Board is. We were dealing with the drought, long-term water supply problems, flooding issues and water quality issues. It’s been a sharp learning curve.”

Haynes stresses the role of the Governing Board members to set policy and allow staff to manage the day-to-day operations of the District.

“We have the best group of employees of any water management district in the world. I want staff to feel like the Board is looking out for their best interests and making it possible for them to do their jobs to the best of their abilities.”

The District faces a myriad of challenges, but Haynes singled out two: diversity and the Southern Water Use Caution Area.

Haynes says an organization achieves diversity when it reflects the community it serves.

“The commitment has to come from the top. Diversity works its way down; it doesn’t work its way up.”

The District is expanding its diversity with outreach efforts to schools and partnerships with existing diversity programs, but Haynes said more could be done to aggressively promote the program.

The Southern Water Use Caution Area is also a priority for the District. Groundwater withdrawals in the 5,100-square-mile area have lowered Floridan aquifer water levels, resulting in saltwater intrusion and contributing to lowered flows in the upper Peace River, and lowered lake levels along the Lake Wales Ridge.

“Agriculture is a major institution in Florida. Farmers took very large risks during the drought. We need to preserve the agricultural industry, especially the small farmers who are the backbone of the industry, while also protecting the water resources.”

Haynes said he is pleased with the deliberate manner in which the District is developing the SWUCA Recovery Strategy, ensuring all users have input into the process.

“We need everybody to have a chance to shoot at it, to criticize it. That kind of review will make a stronger plan with more support.”

With both diversity and SWUCA, Haynes’ policy is one of inclusion, bringing together all parties to explore shared interests, to form a team that can accomplish great things, to follow the golden rules.

Asked about his proudest moments, Haynes remembers his high school victory, but he also cherishes another memory: a flag from Congressman Bill Young, flown over the nation’s Capitol, in honor of Emma Haynes.