The multiple purposes of the LHWP are easily overlooked while enjoying the natural beauty of this suburban woodland. Here one can paddle waters of the Hillsborough River amongst wading birds, turtles, alligators, lilies and cypress swamps; explore over 60 miles of forest trails; fish from riverside boardwalks; or enjoy a relaxing picnic or cookout.

As important as this site has become to the Tampa Bay area in providing recreation, its primary purpose is water storage and water supply. Following severe floods from Hurricane Donna in 1960, the Four River Basins, Florida Project was initiated by the U.S. Army Corps of Engineers to prevent flooding in Tampa and Temple Terrace. The LHWP was designed for temporary impoundment of floodwaters by constructing a levee on its western boundary, a dam on the Hillsborough River and the Tampa Bypass Canal to reroute floodwaters. A structural reservoir was part of the original plan but was later abandoned as the value of natural wetlands for flood storage came to be understood. In the 1970s, the Morris Bridge well field was developed as a source of drinking water for the city of Tampa. Tampa Bay Water manages 20 wells that pump water from the Floridan aquifer system. A water treatment plant is located west of the well field and the levee.

Natural resource conservation is another important purpose of the LHWP. The area's outstanding natural feature is 13 miles of the Hillsborough River, one-fourth the river's length. Land cover consists mostly of riverine forests and pine flatwoods, which are managed by the District to promote biodiversity. The forested wetlands are essential for filtering rainwater before it flows into the river and for storing floodwaters. Significant ecological features include a wood stork rookery, a sawgrass marsh, a sphagnum bog and two sinkholes. Hillsborough County school children learn about the environment at Nature's Classroom Environmental Education Center located within LHWP. The 320-acre site is managed by the Hillsborough County School Board and was developed in conjunction with the District.

Adjoining the LHWP is the 3,000-acre Hillsborough River State Park, which contains an area of beauty and tranquility known as the Seventeen Runs of the Hillsborough River. Access to this broad hardwood swamp is very difficult whether by foot or boat. A primitive canoe trail has been marked, but obstacles may be frequent.

Human occupation of the area has had a long history. Past generations of Native Americans took advantage of flint along area rivers to make tools. American industrialists began harvesting pine, cypress and hardwood trees on the property in the 1840s. Elevated tram roads, built to haul timber through forested wetlands, now serve as recreational trails. The Old Fort King Trail was a supply route from Tampa to Ocala used to support U.S. troops during the Seminole wars and was later used during the Civil War. A portion of this historic route is a multiuse trail that connects the LHWP to the Hillsborough River State Park. The trailhead is located in John B. Sargeant Park.

Size
16000 Acres
Hours of Operation
District lands shall be open to the public from 30 minutes prior to sunrise until 30 minutes after sunset only, unless otherwise authorized by the District per Chapter 40D-9 Florida Administrative Code. 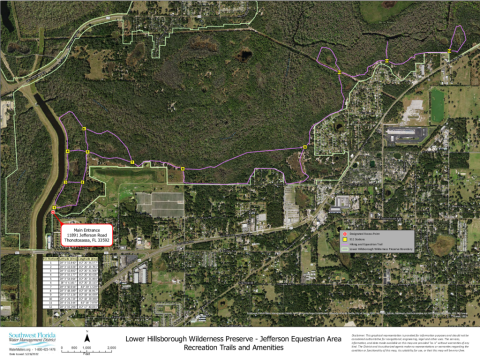 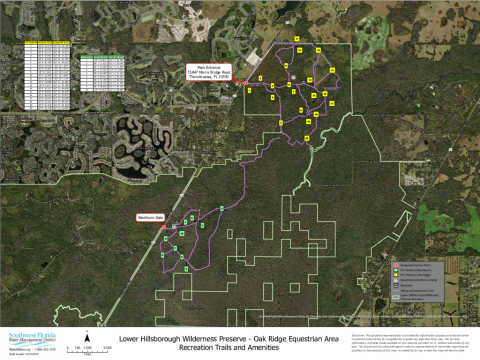 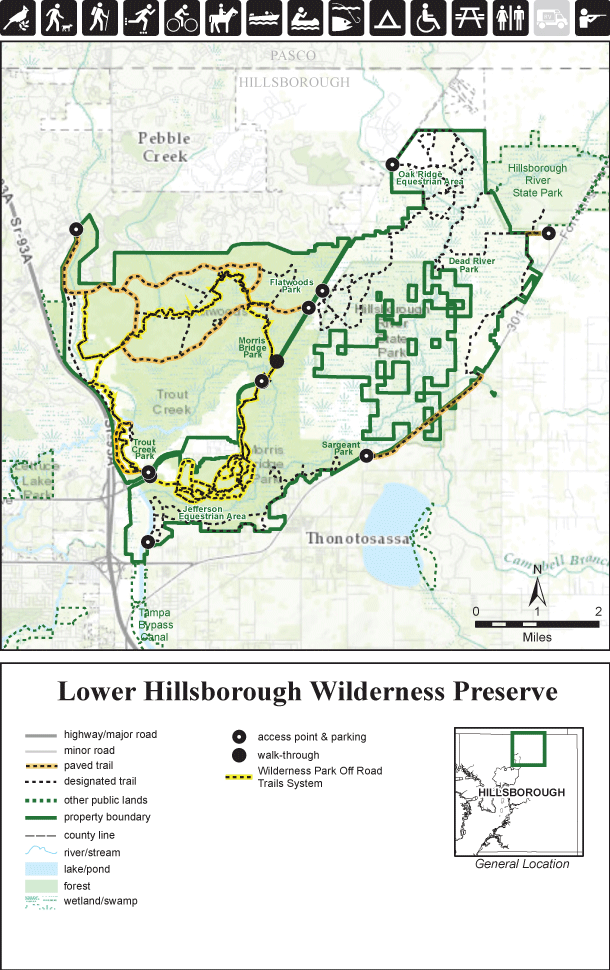