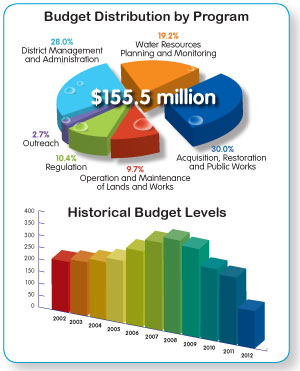 The District’s Governing Board adopted a FY2012 millage rate of 0.3928 mill and a budget of $155.5 million at its September final budget hearing.

The millage rate and budget take into account the merger of the budgets of the District’s eight Basin Boards into the Governing Board and the $107.8 million cap on ad valorem property taxes levied, which was passed by the Florida Legislature.

This millage rate, combined with continued reductions in property values throughout the District, results in a $57.4 million reduction in ad valorem tax revenue from FY2011.

“The development of this year’s budget has been a challenge for us, as well as an opportunity to help clarify our priorities,” said Albert Joerger, Governing Board treasurer. “I believe this budget reflects the District’s goal of providing cost-effective, quality services, while protecting and enhancing the public water resources and natural systems.”

The total FY2012 budget for the District is $155.5 million, which is 44.4 percent lower than the adopted budget of $279.8 million for FY2011. The $124.3 million decrease in the budget is primarily due to the $57.4 million reduction in ad valorem revenue and a $34 million reduction in balances from prior years.

In addition to the ad valorem revenue reduction, state funding was reduced $28.9 million due to the elimination of all Florida Forever and Water Management Lands Trust Fund funding. Other reductions include a $1.7 million reduction in local funding and a $2 million reduction in interest on investments.

The Governing Board merged the budgets of the District’s eight Basin Boards into the Governing Board in May. The merger was implemented to increase efficiency of operations and reduce costs and is projected to save $350,000 to $400,000 annually. In addition, the District reduced staff, cut salaries and benefits, and prioritized projects to meet the new funding levels.

“The staff has done a tremendous job adjusting to our new budget realities,” said Kurt Fritsch, acting director of the District’s Administrative & Management Services Division. “We have had to make some tough choices, some even tougher sacrifices, and will continue to do so. But the Governing Board and the staff have worked hard to ensure that the District can help meet the region’s water needs well into the future.” 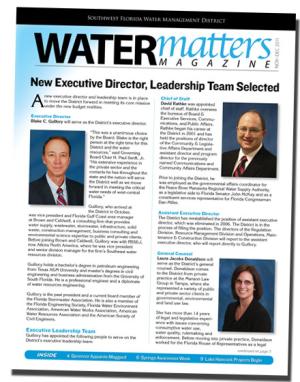