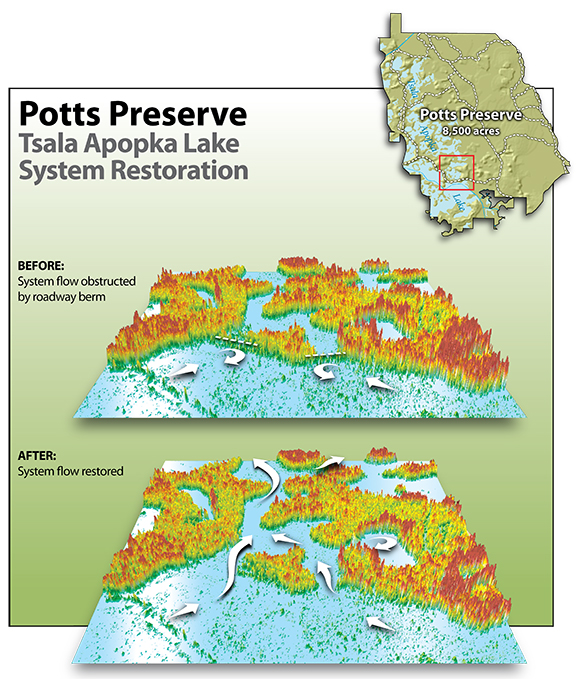 For years the land was about the cattle, not about the water. Ranchers, wanting to take advantage of vast tracts of unspoiled land, built roads through the marsh to connect islands. The roads blocked the flow of water, the marsh dried up and cattle began wandering from island to island to graze.

But the marsh is returning. Water is now flowing naturally between the Hernando pool of Tsala Apopka Lake and Potts Preserve, thanks to a restoration project the District finished in July.

“We started to see flow between the lake and the marsh as soon as we finished the restoration work,” said Jeff Hagberg, District field operations manager. “It’s beginning to bring back the marsh.”

Flow of water from the Hernando pool in the preserve is vital to the health of the Potts Preserve marsh — and a sign the restoration work has succeeded.

“Getting the historic, natural hydrology of the preserve restored has been the District’s goal since acquiring the property,” said Hagberg.

The District removed more than 15,000 cubic yards of fill material at 15 locations to restore the historic natural flow patterns of water between the preserve’s marsh and the lake system. The $74,000 restoration project, funded by the District’s Withlacoochee River Basin Board, took nine weeks to complete.

District workers removed the fill material associated with two man-made features, the western dike and the middle road, which have impeded the natural flow of water between the open water areas of the Hernando pool and the preserve’s marsh since the early 1950s. Workers graded down 4.5 acres of filled area to historic wetland levels.

The dike and road were built by the previous landowners to connect upland islands to provide access to the more remote parts of the preserve, increasing the amount of usable land for cattle grazing. But these filled-in areas hampered the natural movement of water. The project was designed to restore that movement.

The 8,500-acre Potts Preserve was acquired by the District in the early 1990s for protection of the area’s groundwater recharge as well as its important surface water features and wetland habitats. 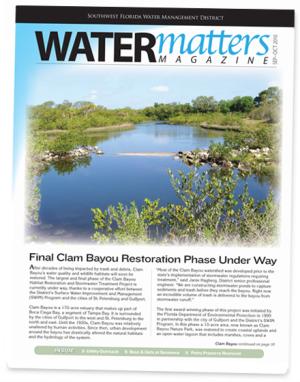