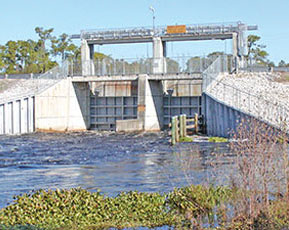 The gates are partially closed at Structure 155, allowing only minimal flow downstream. Behind the structure, the river is going over a spillway into the Tampa Bypass Canal.

Not many people in west-central Florida would argue with that old saying. After suffering through Hurricanes Charley and Frances, the region bore the fury of Hurricane Jeanne, the storm ripping across the central peninsula.

Jeanne’s effects lasted long after her destructive passage. As the runoff from Jeanne’s rain made its way across massive watersheds, one by one the rivers flooded — Alafia, Peace, Withlacoochee.

“Without the Tampa Bypass Canal and the Flood Detention Area, we would have seen the same kinds of flooding along the Hillsborough that we saw on the Alafia, Peace and Withlacoochee rivers,” said Executive Director David L. Moore. “The difference is that there’s more development along the Hillsborough, so the impacts would have been even worse with more homes, businesses and roads impacted.”

The TBC and Flood Detention Area were created as part of a federal project known as the Four River Basins, Florida Multi-Purpose Project to address massive flooding caused by Hurricane Donna in 1960. The Southwest Florida Water Management District was created in 1961 to be the local sponsor to operate and maintain Four River Basins projects.

Nearly 700 square miles drain into the 55-mile-long Hillsborough River that runs from the Green Swamp north of Lakeland to Hillsborough Bay. The drainage basin includes ponds, lakes, sinkholes, swamps and five major tributary creeks. The Hillsborough River Dam is constructed approximately 10 miles upstream of the bay, creating a drinking water reservoir for the city of Tampa and the region.

The federal Hillsborough River project constructed the more than 12-mile-long Tampa Bypass Canal and six dams, or flood-control structures. The northernmost structure, S-155, sits near where the river intersects Interstate 75 just north of Fletcher Avenue. Operation of the two 24-ton gates can redirect all or part of the river flow to the canal, accounting for drainage from approximately 452 square miles.

Redirected flow that backs up while attempting to get through the canal fills in the Lower Hillsborough Flood Detention Area, nearly 16,000 acres of property purchased to provide storage space for floodwaters. When not needed for flood-control purposes, more than 7,000 acres of the detention area are used by Hillsborough County as a regional park, providing numerous recreational opportunities to residents and visitors.

Downstream on the river, the Harney Canal and Structure 161 were constructed to allow diversion of runoff from the 192-square-mile drainage area situated between the Flood Detention Area and the Hillsborough River Reservoir Dam.

District staff works in coordination with the city of Tampa to determine how much water to divert from the river, striking the balance between flood protection and ensuring appropriate water levels in the city’s water supply reservoir.

The District normally operates the Tampa Bypass Canal once a year. This year, the canal was operated three times for a total of 58 days in operation.

In addition to providing flood control, the canal has also become a water supply source helping to meet the needs of a thirsty and growing Tampa Bay region.