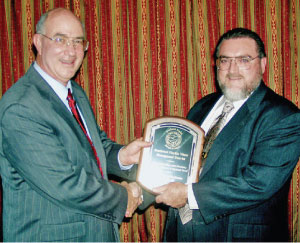 The District’s Operations Department has been recognized on a national level for its commitment to safety.

The Association of State Dam Safety Officials (ASDSO) recently presented the District with the Southeast Region Award of Merit for its efforts in the management and improved safety of its water-control structures and dams. This national award is presented annually to individuals or organizations working in the dam safety field who make outstanding contributions to dam safety in each of the country’s four regions.

During the ceremony, Kuhl and Ravencraft both reflected on the dedication and hard work of District Operations staff.

The District received the award for its long-term plan and implementation of projects to safely operate and maintain its 80 flood control and water conservation structures. Several of the major structures and associated water bodies provide flood control, recreational amenities and potable water supply to many of the 2.5 million people living in the region.

The District began implementing its plan in the late 1990s. The plan involves increasing the scope of technical rigor of the District’s dam safety program through a combination of in-house staff training and contracted services for maintenance and engineering support. Some of the plan’s highlights include coordinating with local emergency management officials to implement “Reverse 911” systems, improving operational response time by installing remote operating equipment on 20 of the District’s critical facilities, and rigorous in-house inspection, supplemented by outside professional help, of dams and structures.

“Since then I have been to the grant writing conference at the University of South Florida, as well as the District’s sharing days,” said Frissell.

By applying for and receiving grants from the District and other sources like Youth As Resources, Frissell is able to provide her K–5 students with a hands-on learning environment.

“We enjoy going outside to the outdoor classrooms to learn about our natural resources and how to preserve them,” said Frissell.

“The students enjoy their investigations and working with the service learning volunteers to complete projects that educate about watersheds, wetlands and other water resources.”

The drought-tolerant garden serves as an ongoing educational tool as Frissell’s students continue to maintain and add to it.

“The kindergarten students learn about the water cycle and then build on that knowledge each of the following years,” said Frissell. “They also get a chance to help with the garden. Even though they may not fully understand why we are doing the things we do, such as mulching, they love it anyway.”

The educational benefit of Frissell’s project also reaches beyond her elementary students. Middle and high school students serve as volunteers assisting her students with their projects.

Frissell also gets help from older students and family members when they hold special cleanup days on designated Saturdays. “When I plan a cleanup day, all I have to do is send home an announcement with my students and to the high schools, and people come,” said Frissell.

Frissell always has new projects planned. This year her classes are working on an exhibit titled “Disappearing Wetlands” for the Florida State Fair, in addition to maintaining the gardens and landscaping planted by previous classes.

When it comes to doing projects and applying for grants, Frissell says one thing always leads to another. “Last year we got our feet wet with an exhibit at the fair. That led to this year’s exhibit that will include scientific, technical and artistic efforts,” said Frissell.

This year’s winner was selected from the seven Water Stewardship Award winners, which were chosen by the District Basin Boards. The eighth basin did not have enough qualifying entries. Twin Lakes Elementary is in the District’s Hillsborough River Basin.