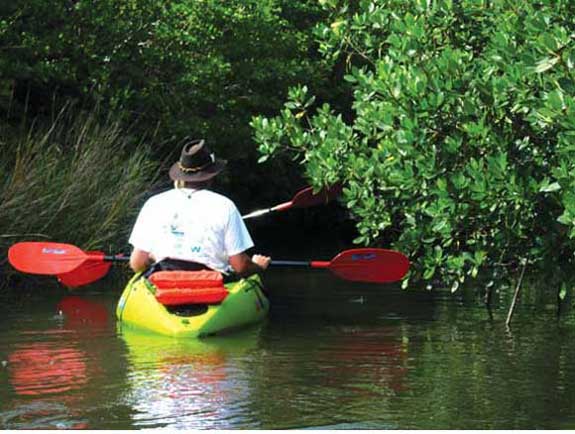 A group of kayakers armed with gloves and garbage bags launched their vessels from the Clam Bayou Nature Park. The volunteers, led by Kurt Zuelsdorf, were on a mission to collect trash from the mangrove-lined Clam Bayou.

Zuelsdorf was able to bring together this eco-minded band of volunteers through a District Community Education Grant he applied for and received this spring. The $3,512 grant was used to pay for the volunteers’ kayak rentals, trash bags and equipment needed to conduct cleanup efforts.

During the eight weeks covered by the grant, 258 volunteers removed 9,600 pounds of trash from Clam Bayou. Seasonal residents and vacationers from 14 states and 3 countries took part in the project, in addition to many local residents. The City of St. Petersburg collects the garbage from city dumpsters placed at the park and a drop-off site along the banks.

Maggiore Creek and Clam Bayou Creek flow into Clam Bayou, bringing with them untreated storm water and trash from the surrounding Gulfport and St. Petersburg neighborhoods. Storm water is water that flows over land during and immediately after a rainstorm and can contain pollutants such as sediment, nutrients, heavy metals, oils, greases, pesticides and bacteria. Without proper treatment in developed areas, these pollutants adversely impact the quality of the receiving water. When it rains, Zuelsdorf says a “tsunami of garbage” is pushed into the bayou.

Zuelsdorf says he was inspired to apply for the grant because of the natural beauty that existed under the debris, the presence of nature, the preservation of habitat and a lifelong commitment to nature’s conservancy.

“Most people don’t know this is here because the bayou is shallow and filled with oyster beds,” said Zuelsdorf. “Most motorized boats can’t get in here — that’s why the garbage piled up. No one can get in here to clean it up.”

Zuelsdorf began publicizing the project by posting fliers at Gulfport businesses. Soon he began to receive a lot of support and attention.

“The Gulfport Gabber called me and said ’Come down and place an ad because an anonymous donor already paid for it,’ ” said Zuelsdorf.

That ad reached one of Zuelsdorf’s most dedicated volunteers.

“My landlord brought over the ad and I came down to volunteer the next day,” said Tricia Tourles. “I was hooked.”

Tourles is known for getting into hard-to-reach spots to pull out trash and for single-handedly retrieving five shopping carts, a bumper, a child safety seat and bags and bags of garbage from the bayou.

Large objects such as shopping carts not only pollute the water but also disrupt the natural flow. Sediment and other trash collect in and around the large object, causing a bigger blockage that can lead to flooding problems.

Zuelsdorf hopes the positive press will help him secure sponsors to continue to fund the project until 2009 when a project funded by the District’s Surface Water and Improvement and Management (SWIM) Program is expected to be complete.

“When I saw the presentation of what is going to happen, I was really inspired to carry on until the District’s project is complete,” said Zuelsdorf. “The more we clean, the more birds and fish we see.”

SWIM’s Clam Bayou Stormwater and Habitat Restoration Project involves the design and construction of three stormwater treatment areas and an 87-acre habitat restoration project on property purchased by the District and the City of St. Petersburg.

Construction is scheduled to begin in 2008 on the restoration phases and two stormwater treatment ponds, one to the north of Clam Bayou near the golf course and one to the south on the publicly owned land around the bayou.

The canal near the golf course drains a 700-acre basin. Much of the drainage basin was developed prior to the implementation of the state’s stormwater rules, and the canal discharges directly into the bayou without receiving any treatment. The plan is to divert flow from the canal into the new pond where it will receive stormwater treatment through detention and skimmers, which are used to remove trash. The City of St. Petersburg will be responsible for maintaining the stormwater pond, which includes removing the trash collected.

The southern pond will treat drainage from a 150-acre basin. This pond will use the same stormwater treatment methods as the northern pond and will discharge into the habitat restoration project, which will provide further treatment and help lower the salinity of the bayou. Lowering the salinity level will make the bayou more habitable for young fish.

A third stormwater treatment area is planned, but design depends on the purchase of additional land.

The group of dedicated volunteers should make continuing the project easier.

“A lot of people think one person doesn’t make a difference,” said Kim Morwood, a first-time volunteer who recently moved to Florida from Colorado. “But when you are out here, you see that they do.”

For more information on how you can help clean up Clam Bayou, contact Kurt Zuelsdorf at (727) 418-9728 or www.kayaknature.com.

The District’s 2008 Community Education Grant Program will begin its application process in June. Applications will be available at WaterMatters.org. The deadline to submit applications is August 24.