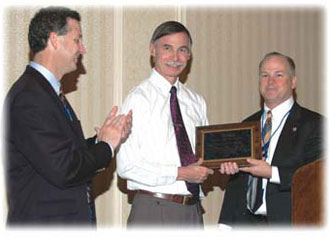 This spring the District proudly presented its first-ever “Lifetime Achievement Award” to Dr. David York for his leadership, vision and contributions to reclaimed water and sustainable water resources in Florida.

York has been the state’s only Florida Department of Environmental Protection reuse coordinator for 26 years and is Florida’s top expert and advocate of water reuse.

He is largely responsible for writing Florida’s reclaimed water rules and guidelines, which have been used as a model by many other states across the nation.

“Dr. York is internationally renowned for his eager enthusiasm to assist and organize, and also for his phenomenal grasp of reuse issues,” said Anthony Andrade, District senior water conservation analyst. “When Florida is compared to other states at national reuse conferences, a frequent refrain heard from those states is ’Of course Florida has more reuse than California, Texas and Nevada. That’s because you have Dr. York.’ ”

While York is retiring from the state this year, he plans to continue to be active in the reuse arena.