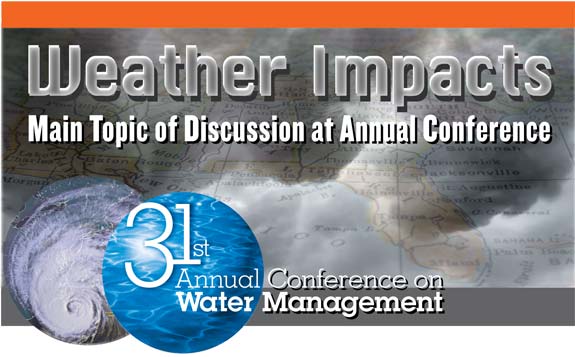 The skies opened up and heavy rains came down when water managers gathered in Tarpon Springs this September for the Annual Conference on Water Management. Coincidentally, impacts from the recent serious hurricane seasons and the “new reality” of water management in Florida were the focus at this year’s conference.

The conference, which is co-sponsored by the state’s five water management districts and the Florida Department of Environmental Protection (FDEP), had a record number of attendees this year. The 610 conference attendees took part in the meetings, workshops and field studies.

Keynote speaker, Max Mayfield, director of the National Hurricane Center, discussed hurricane prediction methods and the effect of global warming and other variables on the number of hurricanes predicted each year. Mayfield pointed out that according to one study, which looked at data from 1970 to the present, there was an increase in Category 4 and Category 5 hurricanes. However, if you look at the data from 1940 to 1970, you will see a similar pattern in the frequency of storms. Mayfield said that weather experts continue to debate the impact of these phenomena and pointed out that the climate is always changing.

“Don’t focus on the number of hurricanes predicted,” said Mayfield. “It just takes one hurricane to hit your community to make it a bad year.”

Since the beginning of 2004, eight hurricanes have had major impacts on Florida, and it appears that decades of severe storm events lie ahead. The recent storms have caused serious damage to our state’s infrastructure and the homes and lives of residents.

The conference explored storm impacts including the destruction of environmental restoration projects; degradation of water quality in rivers, lakes and estuaries; and impacts to the financial and staff resources of water management districts and the FDEP, who are required to respond to the emergencies generated by the storms.

Craig Fugate, director of the Florida Division of Emergency Management, sat on the panel that focused on whether the state is ready to handle a catastrophic event. Fugate began the discussion by exploring the definition of a catastrophe. 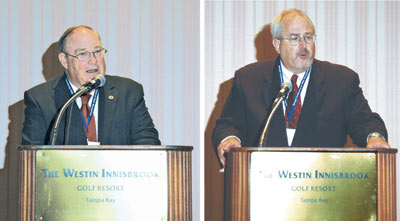 District Governing Board Chair Jerry Rice (left); and Craig Fugate, director of the Florida Division of Emergency Management, taking turns at the podium during the Annual Conference on Water Management.

“It’s all about the scale of disaster,” said Fugate. “I would venture to say that as a water management district, hurricanes are a challenge, but a drought that leads to an inability to provide water to a major metropolitan area would be far worse. You can respond to hurricanes and make things better, but what do you do if there’s no water to pump?”

“In Florida, we cannot respond to catastrophic events as individual pieces; we would fail,” said Fugate. “We can only succeed when we respond as a team and that’s why water management districts are part of the state emergency response team.”

In addition to focusing on storm-related issues, another major panel discussion featured off-stream reservoirs, the workhorses of Florida’s alternative water supplies. The conference also offered two half-day workshops on low-impact development and the considerations for development, implementation and expansion of reuse systems, and field studies to the Lake Maggiore and the Kapok Park restoration sites.

“The workshops were a new addition to the agenda and proved to be very popular,” said Susan Kessel, senior community affairs representative.

Next year’s annual conference is being hosted by the South Florida Water Management District.