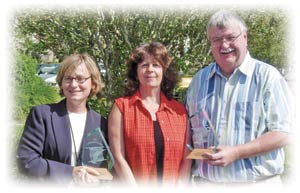 “Bringing Back the Bay” Video
This 30-minute video looks at the recovery of Tampa Bay and some of the challenges ahead. The improved status of Tampa Bay is the result of a cooperative effort among many agencies in the region. The video also recently received second place in the Tampa Bay Regional Planning Council’s 13th Annual Future of the Region Awards.

The video was distributed to government and public access cable television stations in the region. Individual copies were also distributed to schools, libraries and other public gathering places. The video is also available upon request by calling the District’s Communications Department at 1-800-423-1476, ext. 4757.

“WaterMatters” Newsletter
This publication, which you are currently reading, is a full-color newsletter that is distributed to District employees, elected officials and interested persons throughout the District. The publication’s format gives us the opportunity to feature the people and projects that make up the Southwest Florida Water Management District.

Improving Water Quality One Sinkhole At A Time

Students Get Their Hands Dirty While Leaving A “Legacy”

Outdoor Events For The Disabled On The Horizon

Board Members Learn About The District