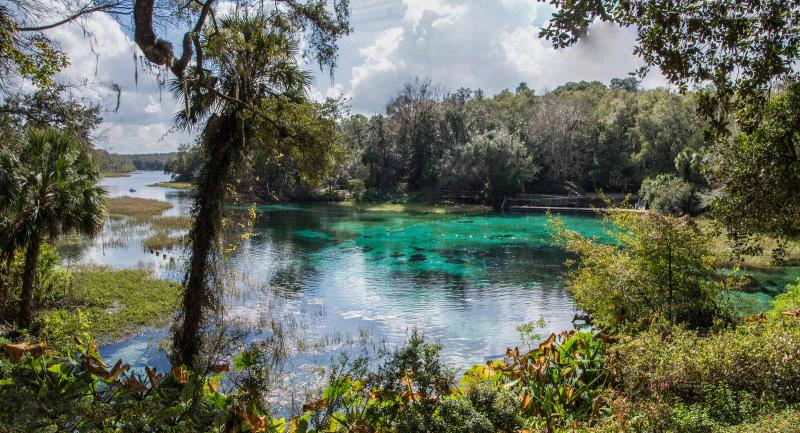 The Rainbow River in Marion County begins at Rainbow Springs in the town of Dunnellon and makes its way 5.7 miles until it merges with the Withlacoochee River. The Withlacoochee River ultimately discharges into the Gulf of Mexico on the border of Citrus and Levy counties.

Rainbow Springs has the fourth largest flow of all Florida’s springs and provides fresh water to the Rainbow and Withlacoochee rivers. The Rainbow Springs State Park surrounds the headsprings and provides an opportunity for visitors to swim in the aqua-colored water or launch a kayak or tube to enjoy the rest of the river. The headsprings property was used as a private tourist attraction that included glass bottom boats and a monorail through the tree canopy from 1934 to 1973.

The diverse ecology of Rainbow River and the surrounding lands provide the opportunity to observe an array of aquatic plants, insects, fish, reptiles and birds. Fish you may spot in the clear waters of the river include Largemouth Bass, sunfish, Large Nose Gar and Atlantic Needlefish. The most common plants you may see include strap-leaf Sagittaria, Hydrilla, eelgrass and southern naiad.

Although the upper portion of the river has some of the clearest water and healthiest submerged aquatic vegetation, the Rainbow River has one of the highest nitrate levels among the Springs Coast systems. The increased nutrients have caused the lower portion of the river to be dominated by unhealthy Hydrilla and Lyngbya algae. Excess algae growth may occur if algae have an unlimited source of nitrates, which can cause reduced water clarity and extreme fluctuations in dissolved oxygen. Low concentrations of dissolved oxygen can be harmful to aquatic insects, amphibians and fish.

The Rainbow River was designated an Aquatic Preserve in 1986 and an Outstanding Florida Waterway in 1987 because of its natural beauty and aesthetics.