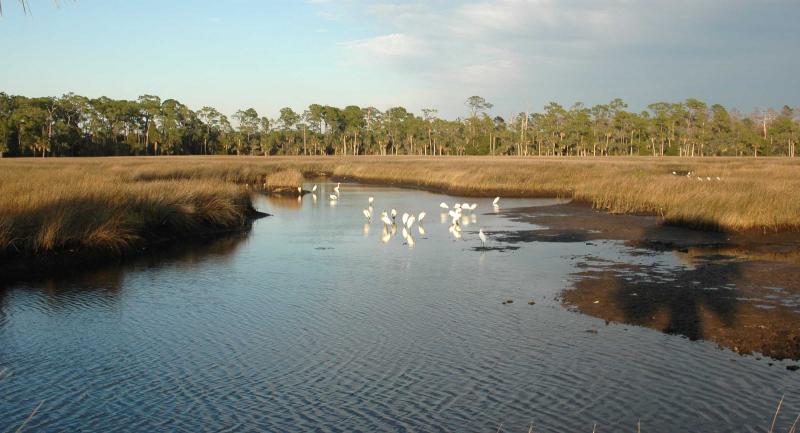 As these rivers near the Gulf of Mexico, they gradually become influenced by tides. When tides are high, the salt water from the Gulf moves up the rivers and springs and mixes with the fresh water, creating "brackish" water conditions. When the tides recede, the influence of fresh water is more prominent.

This mixing of fresh water and salt water creates "estuaries." Estuaries are productive and diverse ecosystems that serve as "nurseries" for fish, shellfish and other animals. The fresh water that flows into an estuary is essential. If the water is polluted or if there is not enough fresh water, young and fragile fish and animals such as shrimp, oysters and crabs will not survive there.

Salt marshes are one type of plant community you can find in an estuary. Salt marshes form in low energy environments where the waves hitting the shore are small. As the tide ebbs and flows through the salt marsh, this flushing action helps nourish the plants, making salt marshes some of the richest and most productive habitats on Earth. The most extensive salt marshes in Florida begin in northwest Florida at the mouth of the Ochlockonee River near Apalachicola and end just south of the Springs Coast Watershed in Pasco County. In fact, saltwater marshes span nearly the entire coastline of the Springs Coast Watershed and are wet, grassy areas mostly made up of black needlerush. You can also find patches of saw grass and many herbs such as morning glory and saltmeadow cordgrass.