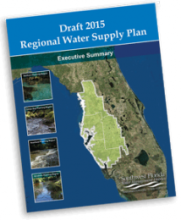 The District’s Governing Board approved the final plan at its Nov. 17, 2015 meeting. The final Board-approved RWSP is available for review below. The District accepted public comment on the draft RWSP through an online comment form, emails to the project manager, and through the mail. Comments and questions are addressed and tracked in a 2015 Public Comments and District Responses document available below.