New trail maps and other information have been added to the kiosks on District properties to enrich the experience for guests. The new trail maps were created for 16 of the District’s most popular properties using detailed information including global positioning coordinates.

The maps are part of an ongoing effort to update information at District properties. In recent years, land use specialists marked District trails using an improved system. New information also can be found in the kiosks explaining the recreational opportunities at each property and the District’s mission.

The District purchases and manages conservation lands to protect water resources and to preserve and restore Florida ecosystems. There are more than 343,000 acres of conservation lands in the region open to the public for recreational opportunities.

Recreation Guides also can be downloaded or ordered at WaterMatters.org/Publications. The 152-page booklet features maps of District-owned lands and the recreational uses available.

Save Water During the Holidays

With the arrival of the holiday season, the District encourages people to think about water conservation when choosing gifts and decorating.

Rain barrels and compost bins are inexpensive gifts that also conserve water. Local Extension offices often sell the items at a reduced rate, and most offer free classes on how to build and use them.

When decorating, use red salvia splendens instead of poinsettias because they require less maintenance once placed in a garden after the holidays. Items found around the home like pinecones, citrus and magnolia leaves make great ingredients for centerpieces.

Above-normal rainfall during the summer rainy season brought significant improvement to water resources not seen in more than seven years.

Many of the District’s lakes, rivers and aquifers have recovered after a four-year drought, which started in 2005. Rainfall totals from the four-month rainy season show above-normal averages across the District. The rainy season was helped by a significantly above-normal June, mostly due to two tropical storms.

Despite the above-normal season, the District urges year-round water conservation. Water levels may rise and fall, but our water resources remain limited. The District encourages efficient, non-wasteful uses of water to sustain our high quality of life. Visit WaterMatters.org/Conservation for water conservation tips. 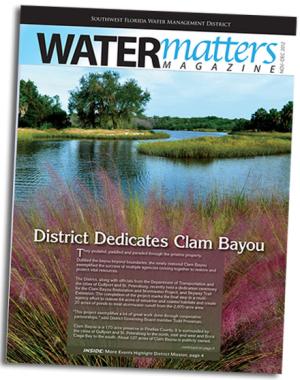