Disaster struck the District over the Independence Day weekend when a fire sprinkler flooded Building 4 at District Headquarters in Brooksville.

The problem began just after 4 p.m. on Sunday, July 3. A ceiling-mounted fire sprinkler activated on the third floor of the four-story building. The sprinkler worked as it was designed, with the fire pumping station supplying enough water pressure to douse a fire. The building’s alarm system detected the water flow and sent an automated message to District staff that an alarm condition was under way.

“It was a lot of water,” said Lloyd Roberts, director of the General Services Department and incident commander for the event. “We’ve heard guesses about the amount of water, but we just don’t know. It would take some detailed hydraulic engineering work to come up with a good estimate. Suffice it to say, it was a lot.”

District Tradesworker Jeff Toth responded to the Brooksville offices, located the problem and closed the valve. He and Senior Tradesworker Jason DiBattista got ready to draw water from the carpet and furnishings, but they soon discovered it was a bigger job than they could handle themselves.

“Jason and I looked around the third floor, and it didn’t look like it would be too much to clean up,” said Toth. “We went to get a wet-dry vacuum, but when we opened the stairwell, we could hear water.”

The soaked third floor was just the beginning. Water began pouring into the second floor, destroying virtually every ceiling tile and pouring onto furniture and files. Water continued to flow downhill, pouring out of light fixtures in the Governing Board room, soaking the furniture and electronic equipment. “There was a waterfall in the cafeteria,” said Toth. Local cleanup and restoration contractors were called and they responded that evening and began extracting water.

Staff began to mobilize in earnest as word of the disaster got out. Information Resources, General Services and other department staff arrived in force to move equipment out of harm’s way. With most of the salvageable equipment safeguarded, the majority of the staff finally left the premises around 11:30 p.m. The next phase was about to begin.

“We had to find space to relocate 130 people,” said Roberts, “and all their stuff.” About 80 staff members found spaces in other Brooksville headquarters’ buildings. About 50 moved to the Tampa Service Office. A few were able to work from home. People set up desks in conference rooms, cubicle corners and hallway cubbyholes. The restoration contractor assigned workers to District staff members to help them pack up boxes and move them to their temporary spaces.

“The overall cooperation has been great,” said Dave Orner, District project manager who is overseeing the restoration. “Everyone has been a delight to work with, from the executive leadership to the people who have been displaced.”

Recovery from the incident is on track. The cafeteria opened back up on July 25, and repairs were nearly complete on the third floor at press time. The District carries insurance that covers buildings and contents and provides coverage for electronic equipment and the extra expenses incurred by the District, such as staff hours, travel and storage fees. 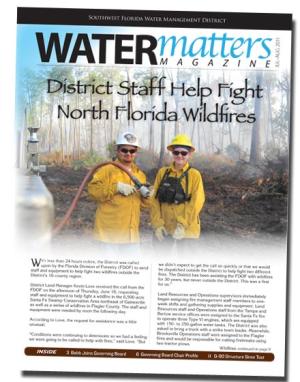