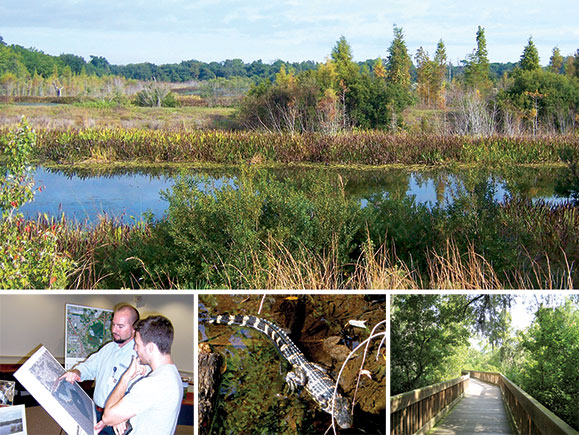 The District is about to begin a restoration project at Sawgrass Lake Park that will improve the water quality of the wetland system on the property as well as Tampa Bay.

Sawgrass Lake Park is a 330-acre natural oasis in urban Pinellas County. Located just west of I-275 and south of Gandy Boulevard, the park is owned by the District and managed by Pinellas County. The lake and wetland system on the property provide natural water treatment to enhance the quality of water draining into Tampa Bay.

A study in the late 1990s showed that the land on the west side of the lake contained elevated levels of lead and arsenic as a result of shooting from a nearby gun range. By law, the gun range was allowed to have spent lead shot fall on a portion of the District’s land.

In April 2001, the District entered into a consent order with the Florida Department of Environmental Protection for the restoration of the contaminated area. The cleanup activities were put on hold for several years during litigation between the District and the gun club, which was ultimately settled. Under the terms of a settlement agreement, the District will remove the lead shot from the affected area on its property and the gun club will clean up its land. As part of the cleanup activities, contaminated vegetation, soils and sediments will be removed and managed according to state regulations.

The cleanup activities will begin in January 2010 and the project will take approximately two and a half years to complete. The public areas of Sawgrass Lake Park have not been affected by the contamination, and there will be no construction or cleanup activities occurring at the park. However, guests will be able to see the cleanup activities across the lake from the end of the park’s boardwalk.

In addition to the cleanup activities, treatment marshes will be constructed and a portion of Sawgrass Lake will be dredged and sediments will be removed. This will create cleaner water for the animals of the lake, as well as improve the overall health of Tampa Bay and its sea life.

The District held a public meeting in December for nearby residents and business owners to discuss the restoration project details and timelines and the overall environmental benefits. More than 700 letters were mailed to property owners informing them about the project and inviting them to attend the public meeting, which was held at the Tampa Bay Regional Planning Council in Pinellas Park.

“Many residents who attended the meeting were interested in the environmental benefits of this project,” said Jennette Seachrist, District Surface Water Improvement and Management (SWIM) Program manager. “This project maximizes water quality improvement and natural systems enhancement for Sawgrass Lake and Tampa Bay.” 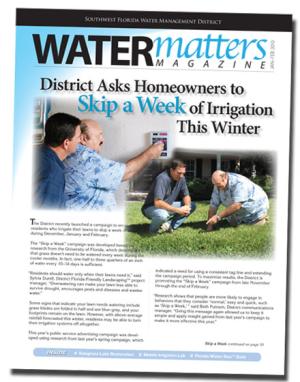