Visitors to the District’s headquarters and service offices are greeted by Florida-friendly landscaping, thanks to the work of proactive staff at each office.

Several of the tradesworkers who help maintain the landscaping have taken additional training to learn about Florida-friendly landscaping™ practices, including plant selection and fertilizer ordinances. In addition, the staff also works with Extension agents and other experts when they have a question.

“The facilities staff has done a very good job of replacing turf and updating our landscaping with drought-tolerant plants,” said Mark Leytze, facilities and construction services manager. “We are committed to the sustainable practice of using only Florida-friendly landscaping, which can reduce our site operation and maintenance costs by minimizing the use of irrigation, fertilizers and pesticides.”

Here’s a look at what you’ll find at each location.

Jesse Stephens, master tradesworker, and Cale Broom, tradesworker, are in the middle of a five-year plan to revitalize the old, overgrown landscaping at the District’s Bartow Service Office. Most of the plants and trees were planted about 17 years ago when the building was built.

The two began by redoing the main entrances, including the area near the sign on SR 60, because that is the first thing the public sees. The overgrown crape myrtles and bushes were unattractive and obscuring the sign. Now the trimmed trees are surrounded by drought-tolerant plants. A micro-irrigation system waters the plants at the roots.

Because the grounds are so big, and Stephens and Broom have other job duties in addition to maintaining the landscaping, they tackle an area each planting season. This spring the two are working on an area near the parking lot entrance.

“Some people suggested we just pull everything out and plant cactuses, but that’s not what we’re trying to do,” said Stephens. “We want people to see how nice it can be and still conserve water.”

After clearing out the area, Stephens and Broom installed micro-irrigation and are starting to plant. All of the plants they use can be found in the District’s plant guide or on the University of Florida Institute of Food and Agricultural Sciences (UF/IFAS) web site.

Cale Broom, tradesworker, and Jesse Stephens, master tradesworker, show off the new landscaping outside the Bartow Service Office. Before-and-after photos show how much of the landscape was overgrown and unattractive.

In addition to using the District and other resources, Stephens completed an 11-week course at the Polk County Extension office to become a master gardener.

During a site visit in November 2008, Angela Maraj, the District’s regional builder/developer specialist, found several positive attributes, including the use of many native trees and micro-irrigation in the planting beds.

Stephens has also salvaged several trees from District lands that were being cleared. For instance, some palm trees were growing too close to a structure so the Operations Department called him and asked if he would like to replant them instead of cutting them down.

Stephens has some advice for the home gardener as well.

“Sometimes it’s a little overwhelming when you think of everything that needs to be done, but you just keep pecking away at it and eventually you start to see results.”

Tradesworkers Jeff Toth and Roger Rutter developed a plan to refurbish the landscaping at the District Headquarters about two years ago.

“Most of the areas were filled with old plants that were at the end of their growing cycle,” said Rutter.

Toth had taken classes through the Hernando County Extension, as well as other classes, to increase his knowledge of Florida-friendly landscaping practices.

“The Extension classes were very helpful because they covered several different topics,” said Toth. “We also referred to the District and the Extension web sites when we had questions about what plants to use.”

The team asked Lou Kavouras, a deputy executive director with horticulture and Florida-friendly landscaping expertise, to review their plan. 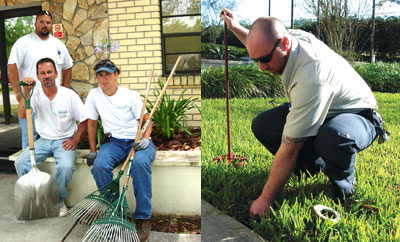 “Jeff and Roger did an excellent job researching the plant databases. They selected a nice variety of attractive plants and made sure they were appropriate for each site,” said Kavouras. “They really did their homework, and I think we will all appreciate the landscape upgrades they plan to implement over time.”

Since then, the grounds team has been working on their plan to replant and mulch several areas. The most recently refurbished area is around the emergency operations center. African irises and lilies are growing in brick planters that used to be home to some scraggly old shrubs. During the establishment period, staff hand-watered the plants every other day because the planter is not irrigated. Now the plants are thriving on their own.

Only a small portion of the turf at District Headquarters is irrigated. The irrigation system is routinely maintained using the same practices homeowners should use to care for their systems.

Allen Loura, master tradesworker, wanted to redo the landscaping at the Sarasota Service Office for several years. However, as the only facilities worker in Sarasota responsible for indoor and outside maintenance as well as the vehicles and security, he did not have time to tackle the project.

“My main goal was to replace the small, irregularly shaped areas of turfgrass with Florida-friendly landscaping to cut down on water use and the time it takes to maintain them,” said Loura. “The areas required more mowing and edging effort per square foot and were more difficult to irrigate efficiently.”

Loura was able to start his project about two years ago when an additional tradesworker was hired.

Steve Noble, tradesworker, and Al Loura, master tradesworker, show Angela Maraj, the District’s regional builder/developer specialist, the changes they made outside the Sarasota Service Office. The photos above show how Florida-friendly landscaping transformed an area that was hard to properly irrigate and maintain.

As you can see from the photo, this small island had several tight corners to mow and edge. It also had 18 spray sprinklers and 10 tree bubblers. Now the area is filled with native plants, mulch and a micro-irrigation system.

Once the islands were complete, Loura and Steve Noble, tradesworker, decided to install drought-tolerant plants in other areas as well.

“We’re looking forward to the day when we can get rid of our push mower,” said Loura.
A key to their successful planting is using two inches of mulch to help prevent weeds from growing. Once the mulch settles, they install about another inch of mulch on top.

“We may spend a little more time weeding the beds a couple of times during the year, but we get that time back and then some during the mowing season,” said Noble.

They also compost leaves and other trimmings on-site and then use it to enrich the soil.
Maraj recently toured the grounds with Loura and Noble to see all the changes they had made.
“They’ve done a great job here,” said Maraj. “This is an excellent example of Florida-friendly landscaping in the commercial setting.”

Noble, an avid home gardener, recently completed the UF/IFAS certificate program in Best Management Practices for Green Industry. The main focus was how to comply with the county’s fertilizer ordinance. Other topics included irrigation, plant selection and integrated pest management.

Loura holds an applicator’s permit and has attended classes at the Extension service.

Loura and Noble are currently working on the changes that need to be made before the county widens Fruitville Road. They’ve already moved the District sign, flag poles and piping. Now they are looking at ways to make the landscaping near the new road Florida-friendly, with an emphasis on safety and low maintenance.

Most of the landscaping at the Tampa Service Office was installed in 2003 after the main two buildings were rebuilt, so the tradesworkers in Tampa haven’t had to do a lot of retrofitting. However, that doesn’t mean the grounds are maintenance-free.

Tradesworkers Jack LoPresto, Kris Miller, Silas Rooker and Linda Nelson maintain the Tampa Service Office. They recently installed Florida-friendly landscaping along the front of the building near US 301.

They still have to trim the hedges, cut the grass, edge and weed.

“Each week we fill a couple of 55-gallon bags with weeds,” said Linda Nelson, tradesworker.
As at the other service offices, the tradesworkers are also responsible for maintaining the inside of the property.

In addition to their regular maintenance, the Tampa crew was recently asked to tackle a new project bordering US 301 to help block the highway and cut down on traffic noise.

Alba Mas, the District’s Tampa regulation director, helped Jack LoPresto, senior tradesworker, select the plants. Mas has a degree in landscape architecture. She chose plants that would be able to tolerate soggy ground because the area often has standing water during the rainy season. LoPresto also asked Loura for advice about the micro-irrigation system. The system has a dedicated line for the large plants, and the smaller plants share a line between three or four plants.

“Al Loura had nothing but great things to say about the system,” said LoPresto. “His recommendation helped us plan out the planting bed.”

This irrigation system cuts down on overspraying onto areas where it is not needed.

“The benefit is that we are not watering the weeds,” said LoPresto.

The project took about two months to complete.

For more information about Florida-friendly landscaping practices you can use in a commercial setting or in your own yard, please visit the District’s web site at WaterMatters.org/florida-friendly-landscaping. 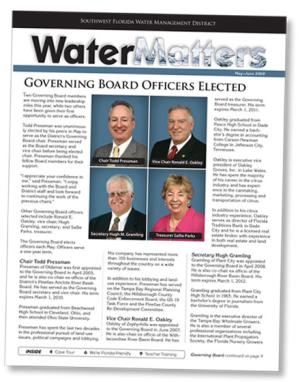