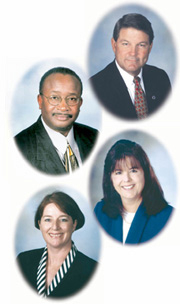 This spring the Governing Board “passed the torch” to a group of new leaders.

The April elections brought about a change in each of the four offices.

“It’s an honor to be chosen chair by this Governing Board,” Dabney said. “We face many water resources challenges in our District. Serving as chair, I look forward to working with this excellent Governing Board and District staff to address these issues, including expanding and further developing relationships with elected officials and regulated communities.”

Ronnie Duncan congratulated all of the newly elected officers and said, “My hope is, as outgoing chair, that we can continue to stay the course we set.” Duncan served two consecutive terms as chair. Board members are allowed to serve no more than two consecutive one-year terms in the same office.