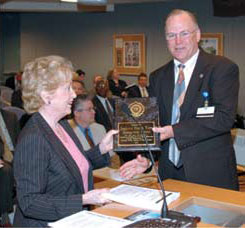 A recently completed project is providing reclaimed water to the Manatee County agricultural community, as well as residential and recreational customers.

The concept for the Manatee Agricultural Reuse System (MARS) project, which was dedicated in February, began in 1994 with the idea to interconnect three Manatee County wastewater treatment facilities to provide 12 million gallons per day (mgd) of reclaimed water to agricultural users.

In 1996, that concept was revised to include upsizing some of the transmission lines, a two-million-gallon storage tank and a reclaimed water aquifer storage and recovery (ASR) well. This change increased the reuse flow from the project to 20 mgd of reclaimed water, which is expected to offset the need for 12 mgd of ground water and surface water.

“This project was one of the original New Water Sources Initiative (NWSI) projects. It becomes the backbone of Manatee County’s reuse system and will increase reuse quantities and efficiency,” said Scott McGookey, District project manager.

“It was great to see individuals from local, state and federal governmental agencies come together on the MARS project, which will help offset groundwater use in the Southern Water Use Caution Area,” said Behling.

The project, which began construction in 1999, was completed in February.

Reclaimed water is wastewater that has received at least secondary treatment and is used for a beneficial purpose, such as irrigation. By offsetting demand for ground water and surface water, this alternative, nontraditional water source reduces stress on environmental systems, provides economic benefits by delaying costly water system expansions and eliminates the need to discharge wastewater effluent to surface waters.