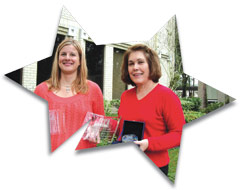 “KNOW WHERE IT FLOWS” Project
The Crystal River/Kings Bay “Know Where It Flows” program received the prestigious Judges Award and a first-place award in the public information campaign category for its efforts in protecting water resources in Citrus County. The campaign was developed to address increasing nitrate levels in Crystal River and Kings Bay. The campaign included billboards and radio and print advertisements, along with public outreach to inform residents about two common practices that contribute to local water quality issues: fertilizer overuse and improper septic tank maintenance. The project was first funded in 2005. This year it has been expanded to include all of Citrus County and portions of Marion County.

“THE WATERSHED AND YOU: A DIRECT
CONNECTION” Project
“The Watershed and You: A Direct Connection” DVD received a second-place award in the video (occasional) category. The 20-minute DVD was created by the Science and Environment Council of Sarasota County as part of a 2006 project funded by the District. The DVD encourages developers, neighborhood associations, gardeners, business owners and residents to understand the key role they play in preserving the natural resources in Sarasota County. The video (occasional) category recognizes videos designed to present information on a single subject.

The FGCA Awards Banquet was held November 30 in Miami Beach.