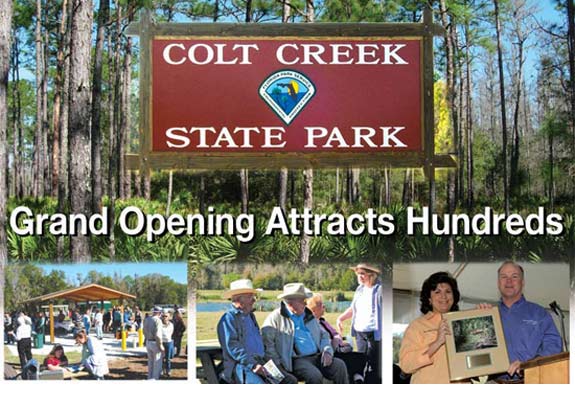 The sun sparkled on the lakes at Colt Creek State Park as dozens of anglers sank their lines while hundreds of other visitors gathered to celebrate the park’s grand opening.

“It really made me feel good when we came in this morning and saw people fishing and enjoying the park,” said Michael Bullock, Florida State Parks Service director. “That’s what state parks are all about.”

The 5,118-acre park, located within the District’s Green Swamp Preserve in Polk County, began as a cooperative effort by the District, Polk County and the Department of Environmental Protection (DEP) to purchase the land from the Overstreet family. The District served as the lead agency in the purchase. District staff negotiated a price of approximately $53,700,000 for the property. Polk County contributed $5 million and the District and DEP shared the remaining costs.

“When I first heard of this project, I thought it was a long shot, but everyone worked together to make it happen,” said Sam Johnson, Polk County commissioner. “We’re all here to serve the public and this is a true example of that.”

Charlie Mack Overstreet purchased the land with his brother in 1939. At the time, Overstreet was only 16. He later bought out his brother. Since then he and his family have been raising cattle and working the land. Overstreet had the opportunity to sell the property to a developer, but chose to sell it to the state so it would remain preserved.

“This land is sacred to me and shall always be,” said Overstreet.

Neil Combee, Governing Board secretary and co-chair ex officio of the Peace River Basin Board, made the motion for the Governing Board to approve the District’s portion of the funding to purchase the property.

“I had the pleasure of spending some time here when I was a kid working cattle and hunting with the Overstreets,” said Combee. “So it is really special for me to participate in this and play a small part in making this possible.”

State Senator Paula Dockery of Lakeland thought the property would make an excellent state park and brought the Florida State Parks Service on board.

“This is a team effort,” said David Moore, District executive director. “And a team needs an effective leader — Paula has been that leader.”

After the ceremony, visitors eagerly loaded trams to take ranger-led tours through the 600-acre portion of the park currently open to the public.

As part of the purchase agreement, the Overstreets will be able to keep their cattle on the remaining portion of the property until May. Once the cattle have been moved, park rangers will begin taking down the fencing and preparing the land for public use. Visitors can currently enjoy picnicking, hiking, horseback riding, bird watching and fishing. Future plans include adding additional trails and camping facilities. Trails connecting the park with the District’s Hampton Tract may also be part of future plans.

During the tour, Scott Spaulding, Colt Creek State Park manager, gave visitors an overview of the area, pointing out some of the special features. The property includes a variety of habitats, including 1,000 acres of longleaf pine community and diverse wetlands. The property also provides protection for the Withlacoochee River, Colt Creek, Gator Creek and the headwaters of the Hillsborough River.

Spaulding has been with Florida State Parks for 20 years and says he was interested in managing this park because of the opportunity to build it from scratch. Spaulding encouraged visitors to “let us know what you want to see or don’t want to see here.”

“I’ve been to 90 of the 160 state parks and each one has its own personality,” said Dockery. “This is your chance. You, the users, get to develop what this park’s personality is going to be. I want this to be the premier park in the state system.”