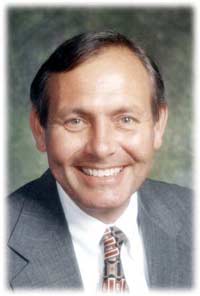 The Sierra Club’s Florida Chapter recognizes Fritz Musselmann’s appreciation for the land. The organization presented the District’s Land Resources director with the Osprey Award at the District’s October Governing Board meeting.

“I really appreciate the recognition,” said Musselmann. “However, I can assure you that this award would not have come to me without the hard work, dedication and trustworthiness of the Land Resources Department staff.”

The Osprey Award is given annually to a government employee to recognize extraordinary efforts to promote or effect changes in policy or practice to protect or preserve Florida’s environment.

The Sierra Club recognized Musselmann for his role in the acquisition of the Overstreet Ranch property, which is now known as Colt Creek State Park. Representing the District as the lead agency, Musselmann negotiated a price of approximately $53,700,000 for the 5,118-acre property. Under the agreement, which was reached within ten months, Polk County contributed $5 million and the Florida Department of Environmental Protection (FDEP) and the District split the remaining costs.

Marian Ryan, Green Swamp Issue Chair for the Florida Chapter of the Sierra Club, said Musselmann’s negotiating skills and real estate knowledge were necessary to reach an acceptable deal among the owners, the county, the FDEP and the District.

The park is within the District’s Green Swamp Wilderness Preserve in Polk County and is slated to become the second state park in the county. A majority of the site is identified by the Florida Wildlife Commission as strategic habitat conservation areas. The property includes a variety of habitats, including 1,000 acres of longleaf pine community and diverse wetlands. The property also provides protection for the Withlacoochee River, Colt Creek, Gator Creek and the headwaters of the Hillsborough River.

The Green Swamp region consists of 870 square miles (560,000 acres), of which more than 260,000 acres have been protected through public ownership and conservation easements. This includes nearly 118,000 acres acquired by the District. Due to its large size, relatively undisturbed nature and diversity of natural habitats, the public lands within the Green Swamp are recognized as one of the most significant natural areas remaining in Florida.

Volunteers Turn Out to Clean Up River and Waterways

Series of Events Will "Span the Watershed"