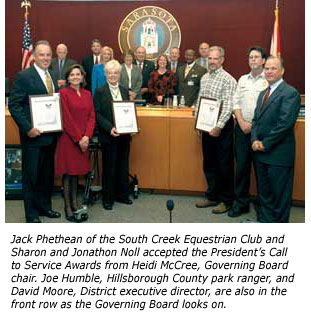 It’s not every day someone receives recognition from the President of the United States.

However, an equestrian volunteer group and two off-road bike volunteers who take part in the District’s Land Resources Volunteer Program have received such an honor.

The President’s Council on Service and Civic Participation recognized the South Creek Equestrian Club and Jonathan and Sharon Noll from the Wilderness Trails Association for each group contributing more than 4,000 hours of service.

The volunteers received the President’s Call to Service Award at the November Governing Board meeting.

“I am thrilled to be a part of this celebration of our volunteers. It’s a great honor to see them recognized by the president. When you volunteer more than 4,000 hours, that’s a true commitment and it must be a labor of love,” said Heidi McCree, District Governing Board chair. “We cherish these national winners and the work that all our volunteers do on behalf of the water resources. They serve as a model and inspiration to others to volunteer.”

The award, which falls under the “Take Pride in Florida/Take Pride in America” program, is the highest honor given through the President’s Council on Service and Civic Participation.

The South Creek Equestrian Club, which is based out of Dade City, helps maintain trails, campgrounds, picnic sites and public entrances in the District’s Upper and Lower Hillsborough Tracts. Last year the group received special recognition from the District for its contributions. The group accumulated 4,136 hours to receive the President’s Call to Service Award.

The South Creek Equestrian Club helps maintain all properties they are allowed to ride on, whether the land is publicly or privately owned.

“We know how much work it takes to maintain property, so our members volunteer their time to show our gratitude for being allowed to use the property,” said Jack Phethean, one of three “Masters of Foxhounds” for the South Creek Equestrian Club. The group’s other two Masters of Foxhounds, or co−presidents, are J. Patrick Michaels and Michelle Vogel.

“Giving back is important. We’re very fortunate to have a partnership with the District,” said Phethean. “Because of the huge amount of urban sprawl, if we aren’t allowed to ride on public property, someday we may not have a place to ride at all.”

Jonathon and Sharon Noll are a married couple who were instrumental in the creation of the Wilderness Trails Association, a volunteer group dedicated to maintaining trails in the District’s Lower Hillsborough Tract. The Nolls have organized and chaired Wilderness Trails Association meetings, patrolled and maintained bike trails in the Flatwoods Park, and assisted with maintaining Trout Creek Park. The Nolls accumulated 4,070 hours of service to receive the President’s Call to Service Award.

The Nolls became interested in mountain biking through their son, which led to an interest in off−road biking and their involvement with the Wilderness Trails Association.

“We got involved because we feel it is important to give back some of the enjoyment we receive from riding off−road trails,” said Sharon Noll, Wilderness Trail Association volunteer. “We want to help maintain and support the trails in our area so our kids and grandkids will be able to continue to enjoy them.”

There are approximately 300 volunteers involved with the District’s Land Resources Volunteer Program. These volunteers play an important role in maintaining the District’s many recreational trails and campgrounds.

“We have dedicated volunteers in the District’s Land Resources Volunteer Program and we greatly appreciate their hard work to improve and enhance recreation on District lands,” said Colleen Kruk, senior land use specialist.

Back To The Future

Florida−Friendly Yards On The Road