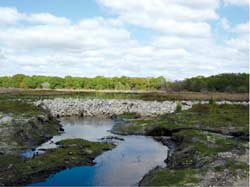 The project goal was to restore the historic hydrology and improve the habitat value of the 3,200-acre Deer Prairie Slough, which is part of Sarasota County’s T. Mabry Carlton Jr. Memorial Reserve. The reserve, parts of which have been adversely impacted by ditching and draining efforts, lies within the Myakka River watershed, is part of the Charlotte Harbor ecosystem and also contains a public water supply well field. With this project, the county and the District saw an opportunity to restore the impacted wetlands and improve the aquifer recharge in the area, which may also benefit the well field.

During the late 1940s and early 1950s, channels were cut through the slough for agricultural drainage. The state was also considering building a road through the area from Venice to Arcadia. Channeling the slough causes it to completely drain the surrounding area, usually less than two months after the end of the rainy season.

“Four years ago this area would’ve looked like a dry pasture with a few mud puddles,” said Warren Reuschel, Sarasota County project scientist, during a recent airboat tour of the slough.

Channeling also led to an increase in invasive species like torpedo grass. Invasive species thrive in disturbed soil. Torpedo grass, a common invasive plant near the edges of wetlands, was the dominant plant cover in many parts of the slough before the restoration. Since then it has been displaced by more desirable plants, including smartweed and maidencane. Smartweed is a plant waterfowl feed on and maidencane is a native plant often used as cover.

The first two phases of the project consisted of backfilling approximately 8.4 miles of ditches within the county’s Carlton Reserve, which borders the District’s Myakka Prairie property. Each phase also included removing exotic vegetation and replanting native plants. Together, the first two phases resulted in restoring the natural hydroperiod of approximately 680 acres of herbaceous marsh and approximately 500 acres of hydric and mesic hammock. The restoration leads to improved and increased wetland wildlife habitat and improved water quality in the downstream waters of the Myakka River.

During the recent tour, several deer, raccoons and hundreds of migratory birds were spotted.

“Since this project has begun, you can see a marked increase in the number of migratory and resident birds — whistling ducks, green herons and spoonbills — that have returned to the area,” said Denise Tenuto, project manager with the District’s environmental section.

In addition to an increase in migratory birds, Sarasota County’s Reuschel said endangered species like wood storks and even a Florida panther have been spotted on the property. Big gators are also a common sight.

“We never saw any big gators on the north end of the site until we completed the restoration. Now there’s a troll under every bridge,” said Reuschel.

The project also includes an extensive monitoring program that allows for a quantitative evaluation of the changes in hydrology resulting from the restoration of a more natural grade throughout the slough.

Even though the project is complete, Sarasota County will continue to monitor the site periodically to record what kind of long-term changes take place. Reuschel suggests that noticeable changes may still be occurring for the next 30 years.

“A lot of biologists and ecologists were involved in the inception, design and implementation of this project,” he said, “and they are all interested in the final results.”

The restoration project was backed by multiple agencies and took three years to complete. The project was a joint effort among the District’s Manasota Basin Board and Surface Water Improvement and Management (SWIM) Program, Sarasota County and the Charlotte Harbor National Estuary Program (CHNEP).

“This project was a good project to partner on for several reasons,” said Tenuto. “For instance, the cost-benefit ratio was excellent, and this project should also lower long-term land management costs in this area.”