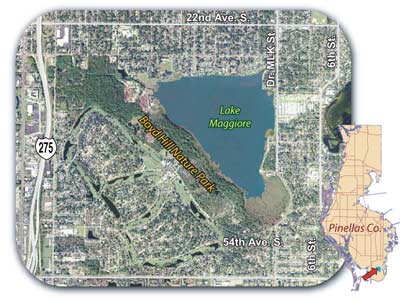 A project in the works for more than a decade is revitalizing Lake Maggiore and its 2,290-acre watershed in southern Pinellas County.

“This project attempts to set back the clock on a long history of water quality problems at Lake Maggiore,” said Manuel López, project manager and senior environmental scientist with the District’s environmental section. “We think residents who live near the lake, as well as visitors, will eventually see conditions improve. Improved water quality and shorelines with native vegetation will provide habitats for fish and wildlife.”

Known as the Lake Maggiore Restoration Project, this is a multi-phase, $17.8 million cooperatively funded effort between the District and the city of St. Petersburg.

“It took many decades of widespread urban and residential development throughout the lake’s watershed to create the degraded environmental conditions that prompted the implementation of the Lake Maggiore Restoration Project,” said López.

Virtually all of the development within the lake’s watershed occurred prior to the existence of current stormwater management regulations. As a result, untreated runoff entered the lake, bringing in excessive amounts of pollutants.

The project began in 1989 with a study that determined that untreated stormwater runoff and the large quantity of organic sediment were causing elevated levels of phosphorus and nitrogen throughout the lake. Excessive nutrients resulted in persistent algae blooms, poor water clarity, low dissolved oxygen, periodic fish kills, elevated bacteria levels and prolific growth of invasive plants like cattails and water hyacinths.

The study led to a management plan for Lake Maggiore, which was jointly developed by the city and the District. The plan outlined a series of projects for long-term improvements in the lake’s water quality, habitats, recreational activities and aesthetic values of the lake.

Projects in the plan included retrofitting the stormwater conveyance system, constructing five alum treatment facilities to treat stormwater runoff, mechanically removing the invasive plants, replacing the failing outfall control structure on Salt Creek and removing 1.5 million cubic yards of sediment from the lake’s bottom. All projects, except the sediment dredging and removal project, are complete. The dredging process appears to be operating better than expected.

The dewatered organic material dredged from the lake is being taken to a disposal site and used as soil amendments. The dredging and removal project began in October 2004 and is expected to be complete by mid-to-late 2007.

Members of the District’s Pinellas-Anclote River Basin Board and District staff recently toured the project area to view several of the Lake Maggiore project elements, including the sediment dewatering plant and the lake dredge.

“The tour was a great opportunity for the basin board members to see first-hand how their investment is benefiting the water quality and natural systems of Lake Maggiore and to appreciate how important the lake and project is to the city and the region,” said Mark Hammond, District resource management department director.

The project overcame several obstacles, including issues associated with dredging. Permit modifications and citizen concerns about temporary haul roads and short-term impacts to limited portions of Boyd Hill Park resulted in project delays. As the applicant for the dredging permit, the city was responsible for guiding the project through the regulatory process. Citizens’ concerns were successfully addressed by including provisions to protect wildlife during the sediment hauling process.

“Mike Connors and his staff in the city’s engineering department have done an excellent job in keeping the project moving,” said López*`.0.0.

“It has taken a long time and the work of many people to get to this final phase of the project, but in the end we believe environmental conditions in and around Lake Maggiore will improve and the citizens will have greater enjoyment of the lake and its environs,” said López.