What is a datum?

A datum is a standard position or level (i.e., starting point) from which measurements are taken.

Originally called the Sea Level Datum of 1929, it was created for vertical control surveying in the United States. This datum was used to measure elevation above (altitude) and depression below (depth) mean sea level. However, as technology improved and the demand for greater accuracy increased, inherent inaccuracies were uncovered in NGVD 29. As a result, NGVD 29 has been superseded by the North American Vertical Datum of 1988.

NAVD 88 was established in 1991. In 1993, Congress adopted NAVD 88 as the official civilian vertical datum for the United States and instructed all federal agencies to upgrade to the new datum. Since it was created, more than 450,000 benchmarks have been set with NAVD 88 elevations and there are more than one million kilometers of leveling data for this datum.

Why has the Southwest Florida Water Management District (District) upgraded to NAVD 88?

Many federal, state, and local agencies, such as the US Army Corps of Engineers, the Federal Emergency Management Agency and United States Geological Survey, have migrated  to the NAVD 88 standard because the NGVD 29 datum will no longer be supported in the future. The South Florida and the St. Johns River water management districts have also migrated  to the NAVD 88. By using one common datum, engineers and scientists from different agencies are able to communicate and share accurate and consistent information more easily.

Why have I noticed a change in the District’s water elevation data?

Within the boundaries of the District, the NAVD 88 elevation number is a shift of approximately 0.7 to 1.1 feet lower that the elevation in the NGVD 29 standard. This variation is due to geographical differences. For example, a water level for Lake Panasoffkee of 39.24 feet in NGVD 29 will be 38.36 in the NAVD 88 standard. The difference of -0.88 is referred to as the “shift” between datums. Only the numerical value for the elevation changes; the depth of the lake remains the same.

Are staff gauges adjusted to the NAVD 88 standard? 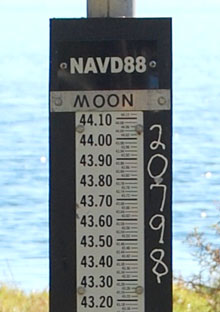 Yes, each active staff gauge monitored by the District has been adjusted to the NAVD 88 standard.

How will I know if a staff gauge is in NAVD 88?

The gauge will have a label that says NAVD 88 on it. If the gauge doesn’t have a label indicating the datum, then the staff gauge is set to the NGVD 29 datum.

If I use the Supervisory Control and Data Acquisition (SCADA) system how do I determine if a site is in NAVD 88?

On the site page there is a field called NAVD 88 Start. The date and time of the change is displayed in this field. If the field is blank, then the data collection site is still in NGVD 29.

In SCADA, are elevations published in both datums?

No, please use WMIS to retrieve elevations published in NGVD 29 after a site has been converted to the new datum.

For more information about this project, visit Vertical Datum Upgrade »

If you have questions about District data or maps, email Data.Maps@WaterMatters.org.

Disclaimer: The data are being provided on an 'as is' basis. The District specifically disclaims any warranty, either expressed or implied, including, but not limited to, the implied warranties or merchantability and fitness for a particular use. The entire risk as to quality and performance is with the user. In no event will the District or its staff be liable for any direct, indirect, incidental, special, consequential, or other damages, including loss of profit, arising out of the use of these data even if the District has been advised of the possibility of such damages.