New Governing Board Member Sworn In 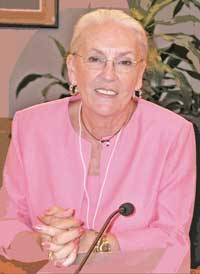 New Governing Board member Pat Symons is getting used to her role at the District. Gov. Jeb Bush appointed Symons in March.

Ms. Symons says she applied to become a board member because of the serious water situation DeSoto County and Florida are facing.

“I’m impressed with the Governing Board and the Basin Board,” said Symons. “I will do my best to serve both boards and the people in my county.”