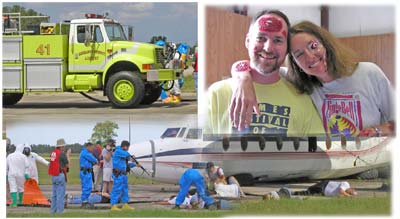 The Brooksville Airport looked as if chaos had broken out. Workers and equipment were stopped in the field while a plane with smoke coming out of the side sat stopped on the runway. Emergency and law enforcement personnel descended on the area.

Despite what the scene may have looked like, it was only a test — a test for the Tampa Regional Domestic Security Task Force (RDSTF).

The RDSTFs, which are made up of 100 people per region, are part of the Department of Homeland Security. The goal of each task force is to assist local agencies in reacting to emergencies involving possible terrorist activity. The purpose of this exercise was to see how prepared the group is in the event of a real attack.

According to the scenario, a group of terrorists that were planning to release a toxic substance over the Tampa Bay area were forced to land at the Brooksville Airport when the toxin onboard started leaking. During the emergency descent, the toxin contaminated some neighborhoods, causing medical casualties.

Tom Leto, Hernando County’s Emergency Management Director, invited the District to take part in the exercise planning committee and to participate in the daylong exercise. The District’s role in this exercise was to provide some equipment and approximately 25 volunteers to act as the terrorists and medical casualties.

The District employees who played the roles of casualties wore special effects makeup that simulated chemical burns and other wounds from exposure to an unknown chemical and also wore yellow tags indicating their symptoms. They were then dispatched to all three Hernando County hospitals to test how the hospitals would deal with a mass casualty situation.

“We learned one thing — unlike regular emergency situations, in a contamination situation the worst patients are seen last,” said Jackie Johnson from the Land Resources Department.

“Yeah, they send the most mobile patients through first so they can take care of a greater number of people,” said Lisann Morris from the Resource Management Department.

“They let me keep my eyeball,” said Lou Kavouras from Executive as she held up the fake bulging eyeball that had been attached to her face to simulate a chemical burn.

Decontamination is not something you want to go through, although the District volunteers were good sports about it and even joked about it later. The volunteers, who were clothed in shorts and shirts, were sent through a freezing cold shower and were made to scrub down with massive brushes. If their “symptoms” were too severe, hospital staff did it for them.

“The brush looked like something you would use to peel off paint,” said Shirley Thomas from the Resource Conservation and Development Department.

“I said to the nurse ‘you didn’t get this from Bath and Body Works did you?’” said Joe Quinn from the Planning Department.

Some of the volunteers who were noted on their symptom cards as being more contaminated than others had to go through a second, hot shower.

“I’ve gone through more showers today than I ever have in one day,” joked Gary Kuhl from the Operations Department.

While the casualties were finished playing their parts at the hospital relatively quickly, the District volunteers who played the roles of the terrorists and the workers in the field spent the day either sitting out in the field or lying on the hot tarmac.

During the exercise, emergency personnel and law enforcement were evaluated on each step. As they moved in, observers watched from a tent and evaluators followed frantically taking notes. The action would move forward, then stop, wait for the evaluators to take notes and move on again.

The exercise scenario was designed for the state by URS Corporation, the consultant for the project. The exercise was based on guidelines given to URS by the Florida Department of Law Enforcement (FDLE) and the Department of Community Affairs.

“This exercise not only tests the participating agencies’ responses, but it also tests how they communicate with other agencies,” said Rachel Hough, an exercise controller for URS.

“I was really pleased with the District’s participation. We had a great group of people who faced this unknown adventure with good humor and positive attitudes,” said Touchton. “I think we represented the District well and I know I shouldn’t say this since it was a very serious event, but we had fun.”