Partnership Between District and Middle School Students Benefits All 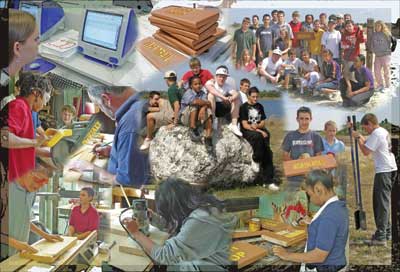 “This is a year-round shop class,” said seventh-grader Clayton Neff.

“We work on personal projects and make these signs,” said Cody Lamb, another seventh-grade student.

Some of the personal projects the students craft between sign construction include jewelry boxes, stools and chessboards.

The idea for the District to pair up with a local middle school on the sign-making project was hatched out of the Land Resources Department.

“We only had $2,500 budgeted for outsourcing the construction of these signs,” said Chris Linhart, resource protection specialist and project manager.

The Land Resources Department began thinking about how they could stretch that $2,500. Kim DeVary, a senior administrative assistant in the department, suggested working with a school program.

After talking to Rick Homer, the woodworking teacher at D. S. Parrott Middle School, they learned that the project would be a perfect fit for his classes.

“A few years ago we started a student enterprise program where the students began making signs for teachers’ classrooms and so on,” said Homer. “This project expands upon that idea.”

“This partnership is a win-win situation,” said Linhart. “It is a value for us, the school received new equipment and the kids are learning new skills.”

“Had we gone with a contractor, we would never have received as many signs as we did from the woodworking students,” said DeVary. “We might have been able to purchase enough signs for only one location.”

The students in Homer’s classes have made dozens of signs for more than 10 different District-owned sites, including the Weekiwachee Preserve, which the students visited.

The students arrived at the Preserve one hot, sunny morning to learn about the land where their finished projects would go. Mary Barnwell, a senior land management specialist and project manager for the Preserve, took the teens on a hike through the brush, explaining what they saw along the way and what kind of plants, animals and other species live on the Preserve.

She explained why the District has controlled burns and why they are good for the land.

“Controlled burns help keep the plants low, which allows for more food to grow for the animals that live here like bears, snakes and deer,” said Barnwell.

An eagle soared overhead just moments after Barnwell told the students to keep an eye out for it because it lives in the tall trees nearby.

Seeing an eagle in the wild was a first for many of the students, but that’s not the only “first” some of them experienced.

“I never used a portalet before,” exclaimed seventh-grader Tandi Patel when she was told the portalet in the field was the only restroom on the Preserve.

After the educational tour, District staff put the students to work putting up some of the signs they had made.

The boys took turns with a posthole digger until they broke through the hard limerock surface, then dug deep enough to plant the sign. Some were more skilled at digging than others.

“This beats being in school,” said seventh-grader Krystal Meyer.

“While the students enjoyed getting out of class and having pizza for lunch, we hope they gained a greater appreciation for wildlife because of their association with this project,” said DeVary. “We hope this field trip helps instill a sense of pride and ownership in them because their work helped improve the property for everyone’s use.”