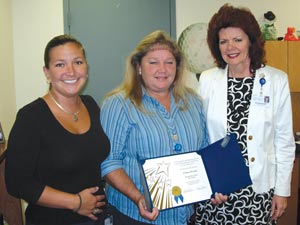 For Donna Brooks, multitasking is more than a catchy phrase, it’s a way of life for this busy mom and community volunteer.

This Shining Star has been with the District for more than 15 years and works in the Information Resources Department as a senior administrative assistant.

Most people who see her at work know that she’s very involved with the District’s Employee Committee, but that is just the tip of the iceberg.

“If there is an Employee Committee fundraising event going on, Donna is there to lend a hand and do whatever she can to help make it successful,” said McNiff. “For all of the countless hours Donna gives of herself, I feel she is a worthy recipient of the Shining Star award.”

In addition to participating in the Employee Committee, Brooks is an active member of the Brooksville Kiwanis Club, volunteers with the Hernando High School Key Club and is the District 4 director for the Florida Dixie Softball league. She is also involved with Papa Joe’s Restaurant’s annual anniversary fundraiser, which raises money for a variety of charitable organizations.

As a Kiwanis Club member, Brooks has assisted with the club’s Easter egg hunt, the Christmas parade, Brooksville Relay for Life and many other activities. The Kiwanis Club also sponsors the Hernando High School Key Club, which Brooks volunteers time with each week. She assists with the student organization’s activities, including the concession stand at high school football games.

As the District 4 director for the Florida Dixie Softball league, Brooks oversees five leagues — Hernando, Spring Hill, East Pasco, West Pasco and Wesley Chapel. This is a year-round commitment that involves fundraising and record keeping. In addition, she works with the Hernando Youth League program for girls’ fast-pitch softball and supports the teams by cheering them on at games and tournaments.

Brooks’ involvement with Key Club and softball represents one of her core beliefs: helping our youth.

“I am involved because I wanted to set a good example for our daughter and the results of my efforts mostly benefit kids,” said Brooks. “When our daughter graduates next year, I may find a few more things to volunteer for. I’ve always been interested in helping with Habitat for Humanity.”