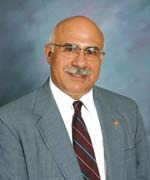 Eugene Schiller has been in public service for 30 years.

This September during its annual conference in San Antonio, Texas, the International City/County Management Association (ICMA) honored Eugene Schiller for 30 years of local government service “for significant contributions and achievements in the advancement of local government administration.”

Schiller, who has served as the District’s deputy executive director of the Division of Management Services since 1992, joined the ICMA in 1973 when he was a village manager attending graduate school with two years of local planning experience under his belt. “I was one of the youngest people in my profession, so joining ICMA was very beneficial. It’s been my professional home.”

ICMA’s history stems back to the early part of the twentieth century. The organization was formed in 1914 to promote a code of ethics and ideals for local government. The mission is “to create excellence in local governance by developing and fostering professional local government management worldwide.”

At the District, Schiller supervises the information systems, finance, general services, human resources and risk management departments and oversees the development of the $383 million annual budget.

The District is recognized as a regional local government independent special taxing district.

Prior to coming to the District, Schiller spent more than 20 years in city and state executive management positions.

Schiller sits on the ICMA’s National Sustainable Development Committee. He is also on the Executive Board of the National Council for Public-Private Partnerships as a national public member at large and is a member of the Government Finance Officers Association, the American Society for Public Administration and the Florida Academy of Professional Mediators, Inc.

During the annual conference, Schiller sat on two discussion panels. Being a representative from the District, he is considered a green, or environmentally oriented, manager; so the panels he sat on focused on water issues and disaster recovery strategies.

“Being involved in ICMA has allowed me to continue to learn and improve while communicating the District’s message of protecting our water resources to other local government managers,” said Schiller.

Technology Upgrade Will Put District Data at Your Fingertips