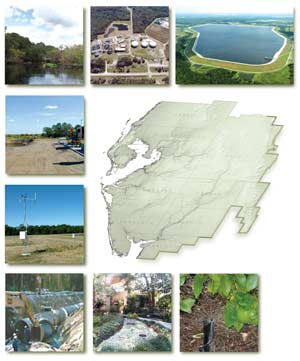 The District is collecting public input on the updated draft of the Regional Water Supply Plan, the tool that points the way to a water supply that can meet the needs of today and tomorrow.

The challenge will be meeting growing water supply needs while also protecting the natural resources. The challenge can be met through vigorous planning, regional cooperation among governments and a commitment to conserve water and develop alternative water resources like reclaimed water, surface water and desalination.

The draft plan assesses projected water demands and identifies potential sources of water to meet those demands through the year 2025. It also identifies the associated costs for developing these sources.

“We have a significant public review process to ensure all involved and interested parties have the opportunity to provide input during this update process,” said District Planning Director Richard Owen.

The draft plan builds upon a number of important regional water supply planning efforts the District has recently participated in, including the efforts of the Peace River/Manasota Regional Water Supply Authority, which includes Charlotte, DeSoto, Manatee and Sarasota counties and municipalities within the counties; and the Heartland Water Alliance, which includes DeSoto, Hardee, Highlands and Polk counties and municipalities within the counties. It also builds on recent cooperative efforts with Tampa Bay Water and its member governments, including Hillsborough, Pasco and Pinellas counties and the cities of Tampa, St. Petersburg and New Port Richey.

The District also held three public workshops in August to gather input from local governments, citizens and other water users.

“These workshops are just one of many opportunities interested people have to provide us with input on updating the plan,” said Owen. “We encourage people to contact us if they have any comments or questions.”

In addition to the public workshops, District staff will discuss the regional water supply plan during two upcoming Governing Board meetings.

The draft plan can be downloaded from the District’s web site at WaterMatters.org. The public can also request a hard copy or CD of the document by sending an email to Planning@WaterMatters.org or calling 1-800-423-1476.

Technology Upgrade Will Put District Data at Your Fingertips