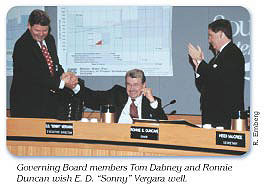 It soon became clear to Duncan that Vergara had mountains left to climb.

“Sonny is an extraordinary individual, one that thrives off of the challenge, that thrives off of the adrenaline rush that comes when you go after and approach new and exciting opportunities,” Duncan said. “Sonny still has some juice left in that engine and wants to fire it up again and embark upon another challenge, another opportunity. It’s exciting to see that happen.”

Vergara faced some of his most difficult challenges when he took over the leadership of the District in February 1997. It was a homecoming in many ways for the new executive director. He was raised in Brooksville, and he began his career in water management here at the District 25 years earlier.

However, he had little time to bask in any homecoming warmth. Almost immediately he was confronted with the problem of resolving the decades-long Tampa Bay “water wars.” A difficult and expensive court struggle had just concluded involving issues with broad implications. How do we meet the needs of a growing population and economy while protecting the water resources? The court’s findings were mixed, and the conflict remained. Choices had to be made. Do we continue the litigation? He remembers describing the potential legal war as “Armageddon.”

Under the leadership of Vergara and the Governing Board, the District created a unique Partnership Agreement. The agreement represented a shift in District philosophy from one of litigation and confrontation to one of partnering. Working with the Tampa Bay area governments, the foundation was laid for a cooperative resolution, with new water supplies being brought on line while pumping was reduced in areas where environmentally destructive over-pumping was occurring.

Vergara also inherited a District that some perceived as cold, uncaring and uncooperative. As a result of his actions and leadership, a cultural mindset of service to the public was instituted that emphasized assistance to permit applicants and meeting their needs, while at the same time assuring protection of natural systems. The Partnership Agreement exemplified this mindset in the District’s relationships with local governments.

In 1997, Vergara knew that to work effectively, staff needed the right tools. In today’s society, those tools are, more often than not, technological.

“We didn’t even have an email system when I began,” Vergara said.

The District soon had an email system and more. Vergara reviewed the District’s Comprehensive Watershed Management Initiative and envisioned the future by adding a technological layer.

Under the leadership of Vergara and the Governing Board, the District created a unique Partnership Agreement.

“By organizing, compiling, assimilating and displaying the tremendous volumes of technological information we now have available to us, and sharing it with others via the Internet, I believe we will move water supply planning a quantum step closer to land use decision-making,” Vergara said. “We can link land and water decision making, and it can happen without water management districts encroaching upon local government responsibilities.”

Vergara believes that this Initiative can eventually change the way resource and growth management decisions are made – less subjective and political, and more science-based.

“Sonny has led the district to heights that not many people thought could be achieved,” said Chairman Ronnie Duncan.

In typical fashion, Vergara accepted the compliment but spread the praise.

At the time of Vergara’s resignation announcement, the executive director did not divulge the details of the new challenges that enticed him away from the District.

“I’m told that he won’t be a stranger to the District,” Duncan said. “We may even see him on the other side of that podium (addressing the Board).”