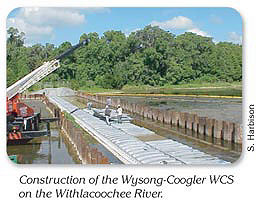 “This structure is placed here to protect and enhance this riverine system. It is here through the persistence and tenacity of hundreds of citizens who cared enough to get involved. If we continue our work together, we can save this wonderful river for future generations.” So said Governing Board member Monroe “Al” Coogler as the District celebrated the completion of the Wysong-Coogler Water Conservation Structure (WCS) with a dedication ceremony in October.

The new structure was named in honor of Coogler, who also serves as chairman ex-officio of the Withlacoochee River Basin Board. Like Rufe Wysong, for whom the original structure was named, Coogler was instrumental in getting the new replacement structure built.

“Getting the structure reinstalled was one of Mr. Coogler’s primary objectives within days of his being appointed,” said E. D. “Sonny” Vergara, District executive director.

The original structure was built in 1965 to help conserve water in Lake Panasoffkee, the Withlacoochee River and the Tsala Apopka Chain of Lakes during the dry season. The structure was 250 feet long, which is the width of the river at that point, and was designed to inflate to a height of 5 feet. The inflatable bag was attached to a concrete foundation and a navigational lock was located on the east side of the structure. The structure was in place until 1988 when it became irreparable. The Withlacoochee River Basin Board decided to remove the bag but leave the foundation in place. In December 1999, the Basin Board directed staff to replace the structure.

Construction on the new Wysong-Coogler WCS began in February and was completed in August. The new structure was built by Harry Pepper & Associates.

“The completion of a project of this magnitude in such a short time frame is the result of cooperative efforts contributed by numerous staff throughout different District departments,” said Ronnie Duncan, Governing Board chair.

The new adjustable structure utilizes the existing foundation and is similar to the old structure in regard to desired performance. Improvements include greater stability and more flexibility in operating the structure at different levels. The new structure is also easier to maintain.

The improved WCS is located near Carlson’s Landing, just south of SR 44, spanning the river which serves as the border between Sumter and Citrus counties. The structure will serve to conserve water levels during low periods, providing the public with more recreational opportunities.

“The structure began operating in October and has been serving its purpose. Everything is running according to plan,” said Lisann Morris, project manager.

“The completion of a project of this magnitude in such a short time frame is the result of cooperative efforts contributed by numerous staff throughout different District departments,” said Ronnie Duncan, Governing Board chair.