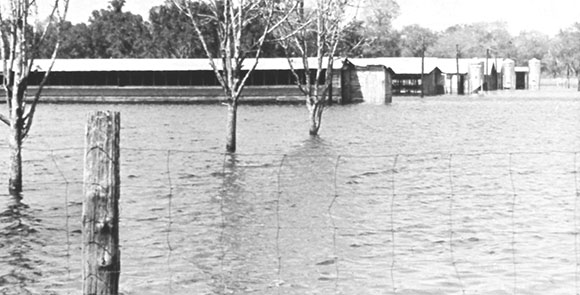 The drowning of thousands of chickens at several Masaryktown chicken farms was one of the catalysts for the creation of the District.

From devastating flooding caused by hurricanes to severe droughts to an unprecedented freeze, major weather events have played an important role in shaping the District’s policies and procedures during the last 50 years.

The District was founded in response to a major weather event. In March 1960, a 27-inch, four-day rainfall event, followed by Hurricane Donna in September, caused massive flooding and damage to west-central Florida, especially to a small, relatively unknown community south of Brooksville.

“Mr. McKethan pushed for a District partly because of the crisis that happened in Masaryktown,” said Twachtmann. “Tens of thousands of chickens drowned in the Flood of 1960, and he saw firsthand the immediate financial burdens of those farmers.”

After the District was formed in 1961, plans quickly got under way for the massive Four River Basins, Florida Project to alleviate future flooding events. However, by late 1962, residents had stopped worrying about flooding and were beginning to focus their attention on the lack of rainfall.

“I’d be out talking about the Four River Basins project and people would ask why we were spending all this money on flood control when our big problem is it’s not raining?” recalls Twachtmann. “The public was right in asking those questions. The problem then was drought, not flood.”

After Hurricane Donna, it was more than 40 years before a major hurricane would hit the region again. In 2005, not one, but four hurricanes crisscrossed the state causing massive flooding and devastation. This time, the District responded by helping the local communities that were hit hardest by the four storms. 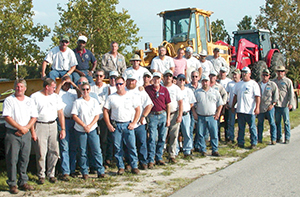 The District responded to the 2004 hurricanes by sending out staff to clear debris and man distribution centers.

According to former District executive director Gary Kuhl, who was Operations director in 2004, the four hurricanes changed how the District responds to an emergency as well as the public’s perception of the agency.

“Dave Moore (District executive director from 2003–2011) sent people out into the field to assist cities and counties for the first time ever,” recalls Kuhl. “I remember we worked 21 straight days during the ‘04 hurricane season. I was so impressed with the quality of our people. Everyone had a dedicated, get-it-done attitude, and I think it improved the public’s opinion of the District as well.”

While hurricanes and flooding have helped shape the District’s history, it’s droughts that have had the most impact, according to District Hydrologic Data Manager Granville Kinsman, who has been monitoring weather for more than 25 years.

“Flooding problems tend to be more localized, whereas droughts are usually regional in nature and have the most impact on our water supply,” said Kinsman. 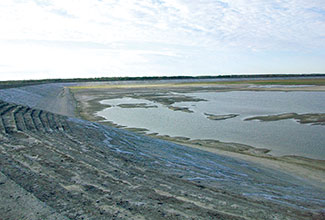 The District has experienced numerous periods of drought throughout its 50-year history, including two major droughts during the last decade alone: the Drought of the Century and the Four-Year Drought. Thanks to the lessons learned during the Drought of the Century, the District, along with local governments in the Tampa Bay area and the southern region, were better prepared for the Four-Year Drought.

“The city of Tampa was days away from running out of water during the Drought of the Century,” recalls Kinsman. “That drove changes to develop alternative water supplies and enhance conservation. The two reservoirs that were developed as a result made a huge difference during the last drought.”

As for the future, Kinsman suspects we could be seeing more droughts and other extreme weather events.

“Weather patterns are really poorly understood,” said Kinsman. “But extremes are becoming more common, which is typical of climate change. The challenge is to ensure that our water supplies will withstand these extremes.”

Perhaps one of the most extreme weather events in the District’s 50-year history was the unprecedented 11-day January 2010 Freeze Event.

Cold snaps that last one to three days have been relatively common during the District’s history. The crop protection withdrawals associated with such short-term cold snaps generally have had limited effects on nearby wells and produced few sinkholes. The previous record cold snap of six days in a row had only occurred three times in the last 80 years of data.

However, during the record 11-day freeze event, farmers in the Dover/Plant City area pumped nearly one billion gallons of groundwater per day to protect their crops, dropping the aquifer 60 feet and resulting in more than 750 dry wells and more than 140 sinkholes.

“On the fifth or sixth day, I called into the office to see how we were doing. They said there were no sinkholes and just a few well complaints, and I thought we were in the clear,” recalls Moore, “And then the bottom fell out.”

During the crisis, the Tampa Service Office set up a call center. Up to 35 District employees took calls, investigated complaints and contacted permit holders. Well construction staff in Brooksville tracked sinkholes and worked closely with homeowners to keep them informed about their well repairs and what it would take to get them working.

As a result of the 11-day event, the District examined all of its freeze policies and procedures and revised its rules, including designating a new water use caution area, to reduce the potential for impacts from groundwater pumping during future freeze events.

“I thought the organization couldn’t have performed any better,” said Moore. “We set up meetings with the community, we met monthly with all stakeholders and by July we had a management plan that would effectively solve the problem.”

Looking ahead, it’s extremely likely that major weather events and climate change will continue to shape the District’s future. However, thanks to the lessons learned over the past 50 years, the District is much more prepared to meet these challenges. 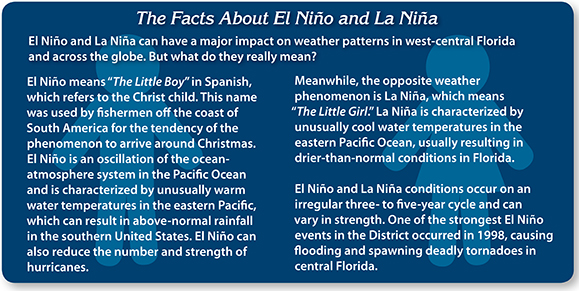