The Governing Board voted June 29 to let water shortage restrictions expire on June 30.

The Governing Board voted to lift the restrictions in response to significant improvements in aquifer and river levels as a result of this winter’s above-average rainfall. Moreover, the region’s major public water suppliers have been able to capture and store large supplies of water to meet the needs of residents. However, the Board urged residents to continue the water conservation practices they’ve learned over the past three years.

“I want to commend the residents of the region for really stepping up to the plate to conserve water over the past three years,” said Ronald E. Oakley, Governing Board chair. “But we want to remind them that just because they may be able to water two days per week, it doesn’t mean they need to. We can’t afford to be wasteful.”

Twice-per-week watering allows residents additional flexibility for determining when to water. Residents are encouraged to water only if their lawns and landscapes need it and to turn off their irrigation systems if it has rained or rain is predicted in the next 24 hours. Some signs that a lawn needs water include a blue-gray appearance, blades folded in half lengthwise and footprints remaining on the lawn for several minutes after walking on it.

Local governments will have the option of returning to the District’s twice-per-week, year-round water conservation measures starting July 1. However, some local governments and water utilities may impose different schedules or stricter measures. Residents should check their local restrictions before changing their irrigation schedules.

Unincorporated Pasco, Pinellas and Sarasota counties have local ordinances and are expected to remain on one-day-per-week restrictions.

The District declared a water shortage in January 2007. Seven counties were subject to additional Phase III restrictions in 2008 and 2009. Hillsborough, Pasco and Pinellas counties were briefly subject to the most aggressive Phase IV restrictions when public water supplies were critically low in the spring of 2009.

For more information on the new year-round measures, visit the District’s web site at WaterMatters.org/restrictions/.

Watch the Weather, Wait to Water

Don’t let your automatic irrigation system run unattended this summer. Watch the weather and wait to water during the summer months of June, July, August and September.

According to research by the University of Florida, an average of three-quarters of an inch of water every three to five days is enough to replenish grass during the summer. West-central Florida receives an average rainfall of 53 inches a year, and most of that falls between June and September. If your lawn is receiving enough water from rainfall, you can operate your irrigation system manually and wait to turn it on as needed.

In addition to watching the weather, a rain sensor is a simple device that will help you determine if your lawn has received enough rain. A rain sensor will override your system when enough rain has fallen. Automatic shutoff devices, such as rain sensors, are now required by Florida law on all automatic irrigation systems.

For additional information, visit the District’s web site at WaterMatters.org/watchtheweather/. 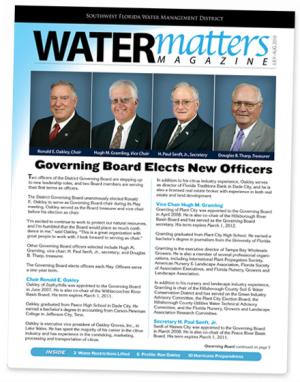