An ugly duckling was transformed into a pollution-removing swan through a District Surface Water Improvement and Management (SWIM) project. The “ugly duckling” in this story was a Florida Department of Transportation (FDOT) borrow pit that was turned into a stormwater pond to improve the water quality of 600 acres of runoff that flows into Tampa Bay. 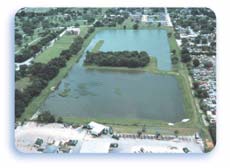 While the project may not sound like a big deal to someone who doesn’t know anything about stormwater treatment, re-designing the pond was important.

The Melburne Boulevard Pond is located in the McKay Bay watershed at the northeastern end of Tampa Bay. The basin is composed of 600 acres that stretch from Hillsborough Avenue south along 40th street. McKay Bay is a “hot spot” in Tampa Bay. Development in the highly urbanized basin took place before stormwater regulations and as a result, the watershed lacks the stormwater treatment that would be required for development taking place today. The basin was identified as one of the basins within the watershed most in need of stormwater treatment.

“A total retrofit for a 600-acre drainage basin alone is an excellent opportunity; put that project in a priority watershed like McKay Bay and you have the potential to make significant strides toward improving water quality in Tampa Bay,” said Hagberg.

The pond was not originally designed to be an effective water treatment pond. The site was a borrow pit excavated in the 1960s. FDOT connected the stormsewer system along 40th Street to the pit for flood storage. During high flows, a connection upstream of the pond to the downstream stormsewer bypassed the pond altogether.

“Opportunities of this magnitude are rare…”

Another problem that needed to be addressed concerned the side slopes of the pond. The side slopes were very steep and heavily invaded by exotic vegetation, including Brazilian pepper, Chinese tallow, primrose willow, alligatorweed, and cattails. The steep slopes extended to the property boundary at several spots and prevented access around the pond for maintenance.

One positive feature of the site is a dense stand of oak trees that remained relatively exotic-free over the years.

“The forested area enhances the aesthetics by reducing the ‘manmade’ appearance of the pond,” said Hagberg.

The SWIM project addressed the problems with the site.

The design and permitting was completed by Environmental Research & Design, Inc. (ERD). As part of the new design, the upstream connection between the inflow culvert and the downstream stormsewer was severed, forcing all runoff to flow through the pond. Water enters the pond from the southwest corner and flows through the sediment sump, which is a deep excavated area that allows particles to settle. From there, the water flows across a shallow planted littoral zone and is forced through the northern channel to a wet detention area on the eastern side of the pond and across another planted littoral zone before being discharged through the outfall. The outfall is equipped with a fiberglass skimmer to prevent the discharge of floatables that may enter the pond. Water flows from the outfall through a newly constructed 42-inch pipe to the existing 36-inch stormsewer, which flows south to McKay Bay. The new design also incorporates the creation of a maintenance berm around the pond for access. With the project completed, the pond provides greater than the current required 14-day detention time for new development. Studies have shown that the most significant mechanism in a stormwater pond for pollutant removal is detention time. The new design maximizes detention time in the pond.

Paying for It All

Funding for the project was a cooperative venture. Through a cooperative funding agreement, FDOT provided the land and half the funding. The District also secured grants from the Jacksonville Community Foundation through the Environmental Restitution Fund and from the Environmental Protection Agency through a Section 319h of the Clean Water Act grant.

According to Hagberg, the project was completed ahead of schedule and within budget. The contractor, Kimmins Contracting Corporation, took the impending rainy season very seriously and did an outstanding job of dedicating the necessary labor and equipment to finish the project ahead of schedule.

“We did encounter several challenges during construction including clay in the excavation areas and a utility conflict with a City of Tampa watermain,” said Hagberg, “but in the spirit of cooperation, the City of Tampa agreed to provide pipe for the relocation of the watermain.”

Besides being an effective stormwater treatment pond, the Melburne Boulevard Pond also supports a variety of wildlife including birds, turtles and fish.

“On any given day you can see various wading birds, such as great blue heron and woodstork, in the pond,” said Hagberg. “A pair of red-shouldered hawks have nested in the trees on the upland island and various aquatic turtles live in the pond. The fish that live there primarily include exotic species like talapia, although some bass have been spotted.”

Government Engineer of the Year